Happy Birthday to Us


Happy Birthday to us.

What a wild and crazy four years it’s been. Somehow against impossible odds we’ve gone from one lone film fan trying to write about every good film he could think of for an audience of a couple to a dozen film fans writing for an audience of thousands. While we don’t get millions of hits for the things we do, we do get a nice regular readership of film fans coming to see what we’re putting up.

One of the things I really like is that we at Unseen are developing a reputation in some circles as people who try to cover films that are beyond the big blockbusters. I love that we’re getting contacted by festivals across the US and the world and asking if we want to provide coverage. I love that I had a PR guy say to me that he couldn’t understand why more people didn’t search us out since we actually provide coverage for the films and festivals we are offered. “You cover to everything” he said. Not quite but we try.

With the coming of the new year we’re going to begin shifting things around. Over the last few months I’ve been talking about some changes that we/I were hoping to make and some look like they will be happening and some are going to be delayed.

As of today I’m going to be less concerned with doing a post a day. While I’m still going to try and get you a film a day, I’m going to be less concerned if it doesn’t come together simply because we have so much planned that even our on average count is going to be something like two films a day. The focus from here on out is going to be quality and not quantity. If I’m writing because I want to write I tend to give you better pieces than when I’m just trying to fill a slot. You have been hanging in with me/us for four years now and deserve better.

Plans to expand our coverage to a wider realm of festivals is progressing so expect pieces on things like The Treefort Film Festival, The Art of Brooklyn Film Festival and Salt City Horror Fest not to mention the usual bunch of festivals.

Other plans such as to move to a .com and alter our layout are still progressing but much much slower than I had hoped. The key factor is that the person going to handle the physical changes is going to have to be me and while I have an idea of what I want to do and how I want to do it. While Unseen has lots of people funneling in content pretty much all of the grunt work is still done by yours truly simply because doing this is my passion. Basically faced with shutting Unseen down for several weeks while I do nothing but set up the new site or press on, I’m choosing to press on if for no other reason than a selfish one- there are festivals I want to attend and films I want to see.

As we move into year five I need to take time out and say thank you to everyone who reads what we do. As always if you didn't read we wouldn't do this... or do it quite so obsessively. You all seem to be interested in what we're seeing so we're more than happy to tell you.

Largely I need to thank everyone who helps with this little engine that could. I couldn't do what I do without every name in that side bar. I like that the group of us is a nice little family that seems to be growing with addition of Hubert and Alec over the last year.

Then last week while I was sitting in a press screening and I overheard a conversation between two writers of note talking about covering things. There was a kind of elitist attitude toward their film coverage. They said that will cover certain directors but not others and certain films and not others. They will only cover the films that are pre-determined as important- with their coverage of  festivals where there are lots of World Premieres (Sundance Tribeeca) directed toward the ones they feel will go somewhere (though strangely their important choices at last year's Tribeca film festival went nowhere). They winced when they over heard another writer recommending  a certain B fantasy film to another writer as a wonderful throw back to Ray Harryhausen.

I was, to say the least, horrified. These were, nominally the people leading the way in film criticism. How can you say you love film and yet not see all sorts of films? How can you not mine new territories? In a weird way what they were saying seemed less about the films than self promotion.

I can't do that. I won't do that. I can't pick one thing to cover. Or claim that something is the best.Yes Unseen will go in certain directions because that's where my, or my writers's, interests lie but I will never say yes or no to a movie for any reason than my mood I won't watch it then because on that day and time I'm just not in the mood. Ultimately all films are important, all films could be treasures and just because someone is a big name director doesn't mean their next film is automatically worth seeing - hell it could very well be shit (Godard any one?)

As Unseen Films moves into it's fifth year I want to renew the pledge I made back in 2010 and that is to search out good films wherever they are and tell you about them. The addendum to that is that now we will also report on what we see at film festivals so that there is some record somewhere of the films that are playing. Someone must provide some sort of record, so why not us? We're also going to mix in some other films that we get a chance to see because someone asked if we wanted to see them. There is to be no list, no scheme, no plan, there is just a search for good films wherever they maybe. We may not always give you a new favorite film, but if we're lucky we'll at least give you a film you didn't mind seeing , even if you didn't really like it. 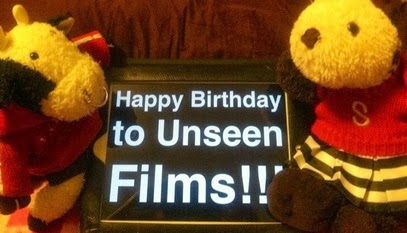