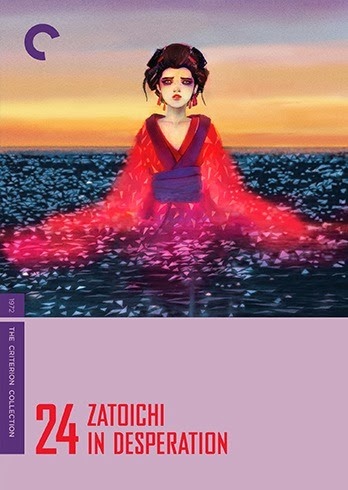 It begins with Zatoichi meeting an old woman on a bridge. When the woman falls through a hole in the bridge Ichi feels obligated to bring the woman's shamisen to her daughter. Arriving in town she finds the woman works in a brothel

One of only two Zatoichi films directed by star Shintaro Katsu, this is a trippy bleak film filled with psychedelic imagery and sound manipulation, amped up colors and realistic violence. While similar  in many ways to the previous entry in the series (Zatoichi at Large) with some of the camera work and images taking precidence over story, this film works better in that its clear from the start that we are not in typical Zatoichi territory. This is a Zatoichi of the mind or of legend- watch the gambling scenes about a third of the way in and you'll see a film that's playing with the tropes of the series and telling a good story. In its way it's more a psychological riff, with director Katsu aiming more to create a mood. Its a kind of Euro-art house samurai movie.

Does it work? Largely it does. Granted it doesn't have a perfect story, but the film does have mood to burn. The film also has some wicked violence including several nasty turns by the villains who, among other things drive a pike through Ichi's hands so he can't hold a sword (Don't worry that doesn't stop him)

For me the real problem with this film, like several of these final films, is that there was some point where Ichi  became a kind of caricature of himself. For some reason he's become an outlaw always on the run. His abilities also became even more super human.I'm guessing that this was the result of the character becoming so hot that you had the Yojimbo and One Armed Swordsman cross overs. While not a bad film I completely understand why the series only lasted one more entry before shifting gears and ending up on television.

How would I rate it? Middle of the pack. While the story is just okay the flourishes that Katsu brings to the film make it worth seeing.
Posted by Steve Kopian at February 26, 2014