Blindman (1971) or Zatoichi in the old spaghetti west 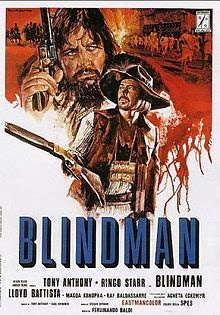 On Saturday Alec was talking about the idea of Zatoichi being a gunfighter. The thing is that back in 1971 Tony Anthony, a man probably best known in the US for starting the 3D craze of the 1980's (His western Comin At Ya was the first film of the cycle), starred in a full bore spaghetti western that was a riff on Zatoichi.

Anthony's blind man is a gunslinger who travels with the help of his horse.His rifle has a bayonet on the end so it's a direct connection to Ichi's cane sword. He is calm fellow who is suffers injustice only long enough to turn the tables. Where Ichi has a reluctance to kill Anthony will just kill you to get what he wants.

The plot of the film has the blind man getting screwed over by a guy named Skunk. Skunk was suppose to help get 50 women to a bunch of miners in Texas, but instead sent them to some bad guys in Mexico. After getting the location from Skunk he blows up the building he and his friends are in and heads off to get the women back, leaving a trail of dead in his wake.

Now to be honest I'm not going to do a real review of the film. the version of the film I saw, an 85 minute one of You Tube, is a tad choppy. IMDB says the film is suppose to run 105 minutes and based on what I've seen I can believe it. I will say that the film is pretty good and very violent with no one really having any qualm about killing someone dead.

Anthony's take on the character seems perfectly in keeping with the Spaghetti Western ideal of gritty violence. He's a weird melding of say Sabata or Sartana and Zatoichi. If you can imagine one of the legendary smart ass western heroes being blind, then you have Anthony's blind man. While he's more gunslinger than blind samurai, I think h's a valid take on the character simply because to be like Ichi in a gun society would result in him dying pretty damn quick.

Those looking for another reason to track this film down should consider that one of the stars is RIngo Starr as a  bandit named Candy. Its a much meatier role than he normally got, with only his role in That'll Be the Day coming close.