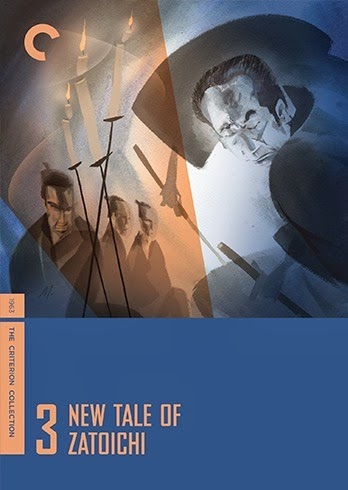 When I started my part in this month long examination of all of the Zatoichi films I began with the last film that Shinaro Katsu portrayed the swordsman in. In that film, Zatoichi (1989) we watched a world weary, very much older (27 years had passed from the start of the film)  blind man navigate the world.  He was hunched over and broken. Everything about the world seemed to pain him.  The world had truly been unkind to him. Part of it was very much keeping in character, but also some of it was the result of Katsu's own physical decline after years of partying (that film was one of the last he made).

I mention the ending here at the start because going backwards and seeing Katsu in  A New Tale of Zatoichi, the third film in the series, I was kind of shocked at seeing a young spry Katsu portray the character that would define pretty much his entire film career. Yes I know Katsu made lots of other films, but it was Zatoichi that was his bread and butter. Here the world hasn't beaten him down, many of his signature mannerisms weren't quite there  and he hadn't settled into a long running character. Seeing this film after seeing the end of the series it was clear why Zatoichi went super nova, there was something about the way Katsu portrayed the blindman early onthat was so incredibly alive.

This time out the film begins with a band of gangsters discovering Zatoichi in a village. He is a wanted man, having killed their boss,Kanbei's brother, They try to subdue him but the blind man turns the table on them. When Kanbei catches up with Zatoichi, the fight between Ichi and Kanbei and his men is interrupted by Zatoichi's master. The fight between enemies is put on hold as Ichi goes off with his master. From here the story spins out around the efforts of Ichi's master to marry his sister to a samurai she doesn't care for.

Feeling less akin to the two previous films and more like all the ones that follow the film feels much less formal. Yes it's very serious, the humor that ran through many of the films would really start to appear in the next film, but at the same time it doesn't feel like quite so much like a stick in the mud.

What I like about the film is that this film looks like a film that was made to be a film. As much as I like some of the later films in the series there is a sense that the films were made with a bit less care. They wanted to make money so they were trying to turn out films to feed the public (25 films came out in 11 years). While there is no doubt they were on their way to a series, the film wasn’t just fodder. We have beautiful wide screen compositions. There are these great attempts at making us truly observers on the scene but positioning us behind trees in doorways or in places where we would be overhearing or happening upon the events. Almost every scene is told in single long takes, there are few cuts to change perspective, actually in most cases the only cutaways are to go to see action that is happening at the same time. We are in the action and the action is compelling.

Definitely one of the better films in the series and worth seeing
Posted by Steve Kopian at February 05, 2014