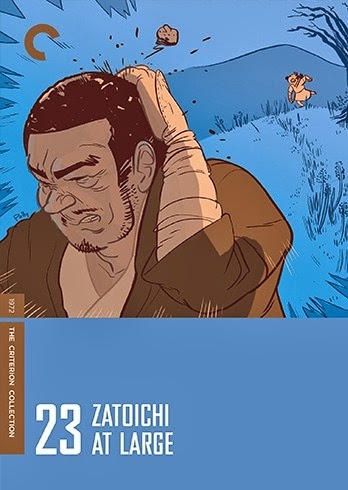 Possibly my least favorite of the whole Zatoichi series, the film is set in motion at the start when Zatoichi delivers a woman's baby in a field of wheat. She dies in childbirth so Ichi takes the baby and tries to find the baby's relatives. When he finds them he discovers that the family has problems of it's own (the baby's aunt is going to be forced into prostitution) Ichi of course gets involved.

For me the film doesn't really work on most levels. Yes the has some great performances but the direction and the craft of the filmmaking doesn't hold up.

The trouble starts at the top with a child birthing scene that should be frightening and instead plays like a raucous  comedy. There is something about Katsu waiving the baby doll around that is much too funny.

Thinks aren't helped by the score which seems to be the sort of serious Montavani or a less funky version of some of the sounds that came out of Philadelphia. While not truly bad the music sounds dated as if it was lifted from your parents record collection. Granted the opening Ballad of Zatoichi which mixes a classical recitation with the funky score is interesting but nothing I'd want to hear again.

The pacing of the film and the story progression doesn't work. While running a brief 88 minutes the film feels several times longer. Scenes seem to drag and the plot seems to flounder around in a way that most of the other Katsu produced films don't.

The real sin of the film is that so much of the film is in close up. We don't see scenes or locations but faces. We see parts of the action not the whole thing. While in 1972 this may have been daring and unique now it plays badly and seems dated. I hate the look of the film. Additionally several sequences seem to have been arranged with too much of an eye to looking good rather than telling the story- the fight that concludes the film for example is more silly than anything else.

Give the film points for trying something new but if you have to skip one Zatoichi film, this is the one to skip
Posted by Steve Kopian at February 25, 2014