From Marvin Kren the genius who gave us Rammbock, a nifty undead film a couple years back comes Blood Glacier (aka The Station).  This poisoned little confection had me squirming in my seat and fearing what sort of hellish nightmare was coming next.

The film is set now. As the result of global warming the glaciers are melting with many now long gone. At a climate station in the mountains an alarm is going off. It seems that something has cause one of the sensing posts to go down. Traveling out to repair it they discover what appears to be a huge "blood glacier". Taking samples they return to their main station and find that the glacier appears to be some sort of weird organism. When they go back to get more samples the blood glacier appears to be gone, but in its wake it's left something much worse- horrible hybrid mutants.

Yes its kind of Cronenberg's The Fly meets John Carpenter's the The Thing but at the same time it manages for most of it's running time to be it's own terrifying little nightmare.  This film generates scares and thrills despite wandering around in somewhat familiar territory.

I think one of the reasons the film works is that all of the characters are adults and very intelligent. There is a reason they are where they are and they talk to each other on a higher level than you normally see in similar films. We don't get endless explanation we simply get discussions of the facts as they stand in the film, if something is explained its because it has to be explained with in the context of the film. The characters don't know much more than we do so as a result we never get talked down to.

The other reason the film works is that director Marvin Kren milks the situations for all their worth. Even if it's true that the film covers territory we've been in before, there are still hiding spots to put your monsters so they can jump out and scare the audience and Kren manages to find them so that you still jump out of your seat despite your knowing its coming.

This movie messed me several times and had me mumbling "That's just wrong" repeatedly.

While the film isn't perfect, the film's introduction of more victims is a bit too fortuitous and the last 15 or 20 minutes it kind of loses focus, this is still a damn great film. If anything any reservations I have are due to my wanting this nightmare inducing film to some how morph into one of the all time classic films. While that's not the case  (though its close), its still scary, creepy, the right sort of unpleasant and the sort of thing that's perfect for mom, assuming your mom loves icky monster movies.

This film plays Saturday night at Film Comment Selects and will be released by IFC later this year. Either way its a must see. 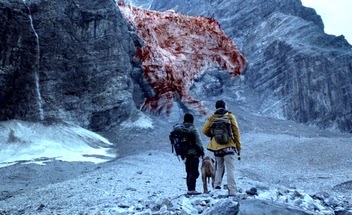