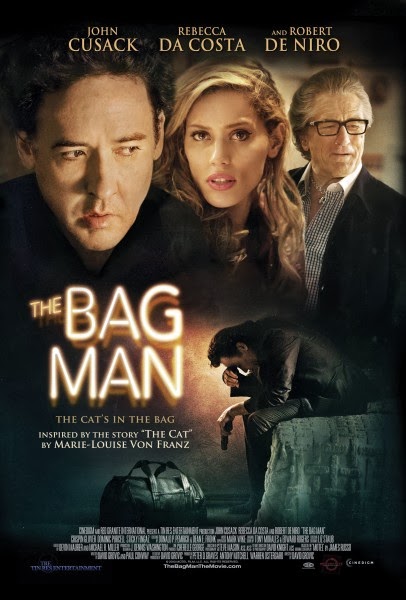 Two weeks since I saw it The Bag Man is still kicking around in my brain. I went in expecting a disposable film, instead I found a film that's is going to confound some, and thrill others with its mix of film noir and psychological fairy tale

Looking like a deranged studio exec, Robert DeNiro asks John Cusack to go and pick up a bag for him. If Cusack can get him the bag- and then deliver it to him, he'll be given a small fortune. The catch is, that no matter what he does, no one, especially Cusack is to look in the bag. Cusack gets the bag at the expense of his cellphone and some blood. He then high tails it to a seedy motel in the back woods where he is supposed to wait for DeNiro.  How long? Until he shows.

The trouble is Cusack is twitchy. Odd people keep crisscrossing the parking lot and banging on his door. There's a six foot hooker who looks like a cosplay Wonder Woman, her boss (who looks like a road show version of Samuel L Jackson's Nick Fury), a weird little person, the strange desk clerk and some well dressed guy looking for a cork screw. Things are just not right and his boss is nowhere to be found.

As the night goes on things become complicated even as they also become very violent. 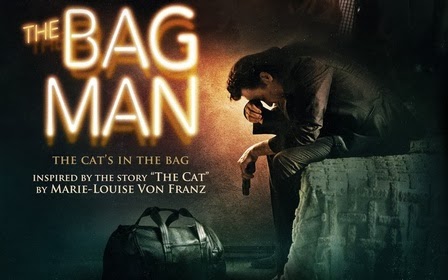 Quick question how many of you know The Cat  by Marie-Louise Von Franz?  I'm guessing not many. I'm also guessing that you probably have  no idea who Von Franz was. For the record she was a psychologist who was a follower of Jung. The Cat isn't so much a story as her deconstruction of a Romanian fairy tale. She did it so that she could teach how stories could be deconstructed in therapy.

I mention this for two reasons: first because the story is splashed across the poster for the film as if it will mean something to the average Joe. To be honest I had to look up what the story was since I had no idea, and as is my norm I try not to look at the press notes before I see a film (I want to see a film as most people do without helpful pointers). The second reason is that if you know what the story is, or at least who Von Franz was, then you'll have an idea that this is a film that has a bit more on it's mind then just being a dark and darkly funny crime drama, a more apt description would be as a psychological philosophical film noir fairy tale

Taking the film on its own terms, we have a very good, occasionally quite nasty crime drama. The film plays very much like a modern day noir film but with a wicked sense of humor. As strange and ominous the supporting characters are, one can’t help but laugh at them. Crispin Glover’s desk clerk is just weird, as are everyone else who wanders through the film. Hell even the clerk at a liquor store seems slightly odd and all he does is stand there. The scene where DeNiro punches a woman in the face is both shocking in its suddenness and funny for the dialog around it.

The performances are for the most part uniformly excellent. I completely understand why everyone in the cast took their roles. Cusack gets to turn the man of action on its head and DeNiro creates one of the more frightening villains of his career with a character who is incredibly intelligent and terrifyingly violent. (For the record the worst performance is by the guy playing the attorney at the end who is so bad you have to wonder what he did to get the role)

For the most part I really like the film but at the same time I have a slight reservation about the film- I kind of knew where it was going. (A word of warning I may let slip with a couple of spoilers from here on so if you don’t want to know don’t read on)

I’m not too sure that giving the source of the film on the poster is really such a good idea. As I’ve explained I don’t think most people will know what it is, however if you do look up what it is you’ll find rather quickly that the film while very much a crime film is also very much a fairy tale or a fable. Actually if you know the tropes of fairy tales and fables you can see where it’s going pretty early on.

On its most basic level the film is a kind of knightly quest with the knight (Cusack) sent on a quest by his lord (DeNiro) in order to obtain some treasure. There are of course conditions (don’t look in the bag) a damsel to save from monsters (all the other people at the motel). Of course we end up with a battle between “father and son” for the right to have a place in the world. The nature of the tale is that after all of the dangers and perils our hero will overcome every obstacle and win the day and the lady. It’s the sort of story we’ve been telling each other for centuries, which for me is the problem, once I saw the fairy tale framework I knew how it was all going to play out.

One shouldn’t take that as any real knock on the film, it’s not, I mean this really is a wickedly violent film with some great smart ass lines. I love that the film is actually trying to do more than just be a down and dirty noir update. What I’m bothered by it that once I knew the forest we were operating in the edge dulled slightly. I knew who was going to be left standing.

Quibble aside this film impressed the hell out of me. I think the fact that I was expecting it to be just another destined for home video dump allowed it to sneak up and surprise me. It wasn’t until I started the film and the first scene between DeNiro and Cusack started playing out that I realized that there was something special here. A real find and a film to make an effort to see.