Zatoichi (1989) (aka Zatoichi Darkness is his Ally) 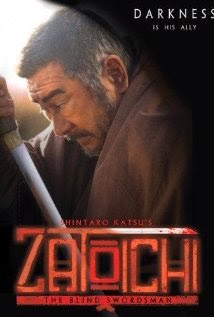 It begins with an older , greying Zatoichi who is in prison being abused by having his food stolen and soup dumped on the floor. Ichi kneels down and sucks the soup off the ground. He then goes to eat and finds his rice has been stolen. Another poor man gives him some of his rice. The man  tells Ichi that he is being persecuted for trying to make things better.  This leads into a fight between the blind man and another prisoner in which the other man is literally broken apart- this is no longer you're fathers Zatoichi films and for Ichi perhaps the world has gotten a bit worse...

Coming 16 years after the film series ended and 10 years after the TV series the film feels very different than  what had gone before, despite hitting many familiar plot points.  This is very much the work of an older more mature filmmaker. While I don't know how the film relates to the TV series (I know it ignores the end of the series) you can feel how the production of the TV series influenced it with an economy of style and an intimacy that isn't always evident in the earlier films.

The plot of the film runs together several familiar plot threads with Ichi in trouble with gamblers for being too good, rival gangs battling it out,a noble ronin who befriends the blind man,  a man looking to change the world and of course revenge. Please forgive me for not going into detail but frankly in the time it took me to move from TV to computer the details of the plot were gone. What sticks with me is the small human moments the exchanges between Ichi and his friends, the young girl who says she looks like Ichi's mother, the little kids writing around the blind man resulting in flying ink...

And of course the violence. There  are severed limbs and heads not to mention gallons of blood. Ichi is constantly fighting roving gangs sent to kill him. A small army dies by his hand. Its kind of exciting but at the same time there is a sadness to it all. Why can't anyone just learn to leave the poor guy alone?

Shintaro Katsu's portrayal is stunning. Its clear he and the role are one. Every move, every gesture is organic. If you've seen other films in the series you can see just by body language that time has not been kind to Ichi. his movements have moved in on themselves as if he's afraid to move lest he get banged up.This is an older and sadder man.

I'm not sure what the story of the making of the film, but I know that this was one of the last films that Katsu made. It was the last that he directed and while I was watching it I was of the opinion that had the script been less all over the place this would have and could have been the best of the series. The moments, the small character moments are truly amazing and the film's tone and feel haunt me. In a weird way the film on an emotional level is one of the most powerful in the series, and possibly of any film I've seen with Katsu in .

In reading some reviews of the film several people said that when the film was done they were left wanting one more film. It felt to them, as it felt to me, like Katsu was trying to finish with the character and almost did it. This isn't to say that it's a bad film, oh hell no, only that it's almost a great film that seems to have been compromised by he need to give fans a little of everything.

However you feel about the film, if you like the character it behooves you to track down the film and see the final appearance of a screen legend.
Posted by Steve Kopian at February 28, 2014