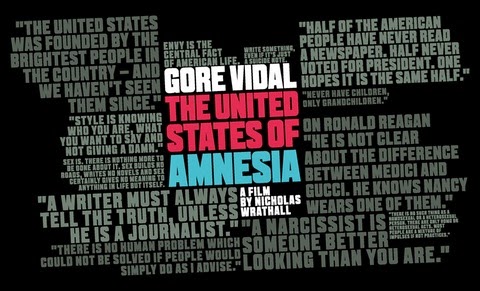 Friday a really great film opens for its theatrical run Gore Vidal Unites States of Amnesia, is finally unleashed on the world.

I saw the film last year at Tribeca and I loved it. I’m a longtime fan of Vidal and his wit and United States of Amnesia is a great overview of the man’s life and his ideas. Far from being hagiographic, the film is in fact a warts and all portrait of Vidal. We see his mistakes and missteps and people talk about his prickliness. What I love about the film is that it’s a great mix of Vidal’s own words cut together from interviews both old and new as well as interviews from the people who knew him. To me the film is a great way to revisit with one of the great men of the last half century or so as well the perfect place to get on board the Vidal bandwagon with the film acting a primer as to his work and thoughts.

My only complaint is that the film is a bit too breezy with some bit of his life rushed over.

Never mind the slight reservation, I loved the film. I loved it so much that I gave to the Kickstarter campaign to get the film finished. Do yourself a favor and go see it when it opens Friday. If you want to see my original pieces on the film here is the the original Tribeca piece I posted right after seeing it and this is the review I ran a couple of days later.
Posted by Steve Kopian at May 21, 2014