I Frankenstein (2014) and the reinvention of old monsters 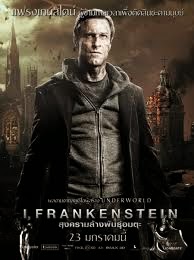 Do we really need to keep reinventing old monsters?

A few years back  we got the Hugh Jackman in Van Helsing, which had Dracula's nemesis fighting variations of the classic universal vampires, werewolves and Frankenstein monsters. Then we got the Underworld films and the Twilight films  which had the werewolves and vampires battling and earlier this year we got an attempt to do it all again with I, Frankenstein.

I Frankenstein has the monster getting involved in a battle between the the gargoyles and the demons.Once more our hero is drawn into the center of a great war that no human is aware...and so on and so forth. Yea we've been here before....

...on the other hand the film actually almost works. Say what you will the world that the film creates actually makes sense. It also has some great action sequences (even if they are full of CGI) and some great characters. The trouble is that the film spends much of it's running time explaining everything rather than showing it.

I've seen the film twice now and to be honest I liked it more the second time. Stripped of the disappointment the first time through I found that there is a seed of great film waiting to be born. The second go through has me seriously considering trying to track down the graphic novel on which its based in order to see where the trouble in the plotting came from.

I've always been wary of literary/ filmic rethinks.  since if you don't instantly connect in some new way you risk losing reader/viewers quickly. More times then not the rethinks come off as lazy. In literature I can only really think of the Brian Aldiss's Frankenstein Unbound and Alan Moore's League of Extraordinary Gentleman as examples where the rethinks work.(Actually there is a Dracula rethink whose title I can't remember that I loved)

Cinematically I suppose I'm kind of more forgiving. Any film based on a book is right off the bat taking liberties. Unless you're an absolute fool you can never expect that the film of a book will be the book. You can expect a closeness but no an exact copy. Going into any film one braces for differences.

For me the problem with it and recent films is that the cross mixing of legends and characters seems to elude most writers.  To me most writers seem to be lifting from the old because its a way into things. If I take Frankenstein then I don't have to be quite as creative. If I mash these things up I'll get fans of both.

I suspect its the drive to get fans that drives the way films are put together today. To me its got to be execs going "what is working today? And Whats a variation we haven't tried yet" that lead to werewolves and vampires which spawned to gargoyles and demons with the walking dead tossed in there (Don't forget the monster is the original zombie).

Unfortunately no one is working out anything beyond that. No one is trying to make anything good, just a variation on what went before. Seriously the producers of I Frankenstein are the same ones who do the Underworld films and I'm making a guess that the source graphic novel was reshaped on the forge that created Underworld.

I don't need this.

What we need is better thought out rethinks. We need rethinks that exist for more than just a money grab.

(Tomorrow I take a look at film that I think is a valid attempt at rethinking a legend)
Posted by Steve Kopian at May 14, 2014