The Tribeca Boxing Film Festival 2014 highlights the dark side of the sport in Champs, Maravilla and Glass Chin

If  you know me to any extent you know I have a love of the sweet science of boxing. There is something about the sport that appeals to me. I don't know what it is, I don't really care. It's just something I like.

I've been a fan of the sport going back to my childhood. Probably the first boxer I knew was of course the greatest, Muhammad Ali. I also knew the names of older boxers thanks to movies, newsreels and the talk of my parents and grandparents.  It wasn't until my late teens when the love of the sport really started. As I said over last weekend one of the first boxers I knew and followed was Mark Breland. Breland was someone who I latched on to in the run up to the Olympics. He was my way into the sport since by following him I found out about other boxers.

As much as I love boxing it is a sport that has a a not so great reputation for being on the up and up. The sport has been a haven for gamblers and gangsters who have tried over the years to manipulate the winner and the losers in order to make a buck,  or to to make their guy look better. Its a reputation that that found its way into countless film noir films over the years.

The plot of the film has ex-fighter Bud weighing a couple of options. It seems a friend of his wants him to help train an up and coming fighter for a short notice HBO match. Bud has also been offered a chance to reopen his recently closed restaurant in New York City by his friend JJ. JJ will put up the money for Bud, all he has to do is run the restaurant until he can pay JJ back-and he has to help with his collections. Bud isn't entirely happy with it but he goes for it.  Its the worst move Bud could ever make.

I'm not a fan of the film. I really dislike the twists and turns in the film. I can't stand that Bud will alternately reveal how bad JJ is and then go along expecting him not to screw him over. I never believed that anyone could be that stupid. In talking to Mondocurry about the film he suggested that Bud wants to believe he'll get his place back so bad that he'll do anything,. I would accept that except that in the closing minutes of the film when there are several turns that are unbelievable unreal and down right dumb we find out that Bud had agreed to throw a fight years before. It kind of chops the legs out of how we feel about him.

On the other hand the revelation, in addition to the blackmail plot, add fuel to the fire that popular culture doesn't see the fight game as on the up and up and that it's still fixed.  Its a sad state of affairs but one that's bourne out by the new documentary MARAVILLA. 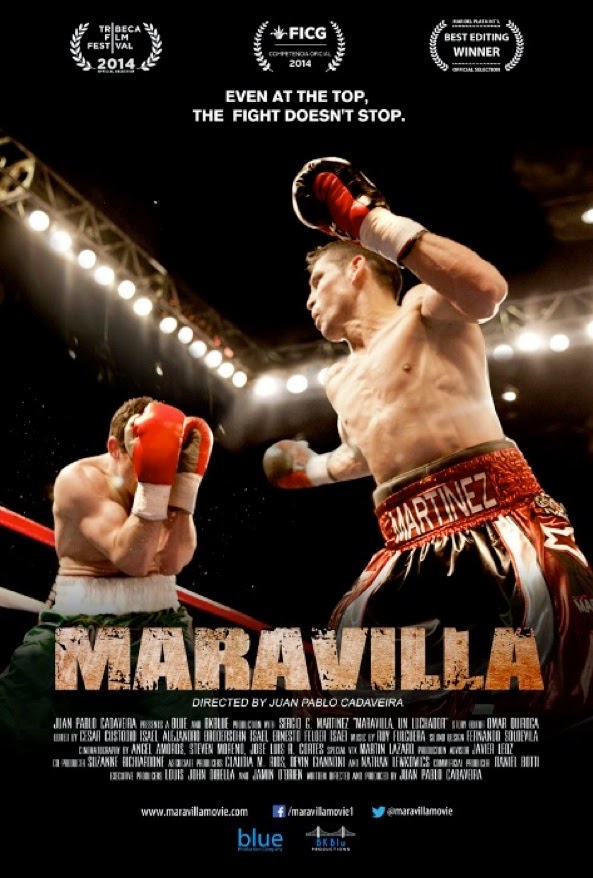 MARAVILLA is the nick name of Sergio Martinez the amazing Argentinian fighter who despite a late start in the game rose to the top of his weight class.

The film tells the life story of Martinez as it charts the course of the fighter to regain the title he lost when he refused to fight a ranked but no name fighter instead of taking a fight which would make him money on HBO. The title was then given to his opponent who then lost the title to the marginally better Julio Cesar Chavez Jr, the god son of the head of the boxing commission that stripped Martinez of the title. Flashing back and forth between Martinez's early life and his pursuit of Chavez Jr the film paints a dark portrait of the boxing organizations that control fighters destinies for their own ends.

I really liked this film. While I'm not going to say it's one of the best boxing films I've seen it is a timely one. At a time when there is an outcry about the safety of the fighters (and MMA fighters as well) the film is a kind of damning indictment of the people who are tasked with keeping things safe and fair. If they aren't going to keep things on the up and up you could argue that we may never see any sort of real effort to keep the sport safe. Its clear watching the film the various organizations will do whatever the hell they want to until enough people complain- Martinez got his fight with Chavez Jr but only after essentially shaming the organization into doing so.

Of course that's only a small part of the film and as a portrait of a man who rose above his station through the ability to box MARAVILLA is time well spent. 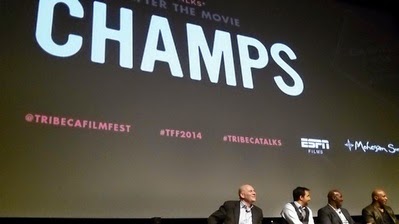 Its the ability for boxing to lift people up out of poverty and dire circumstances that CHAMPS is all about. Following the life and careers of Mike Tyson, Evander Holyfield and Bernard Hopkins CHAMPS is a warts and all look at how poverty can be over come and how bad men can be redeemed through the discipline of boxing.

And when I say warts and all I do mean it.The film deals with all the aspects of the sport both good and bad. The need to cram it all in is the film's flaw since it has way too much going on for an 80 odd minute movie. In all seriousness this film needs another hour just to deal with issues like head trauma, cherry picked fights and post career problems. The film wants to tell us everything and it kind of does, but there is so much more to tell. So much in fact that I wanted to stop the film and take a breather.

After the screening I attended there was a talk with Tyson, Holyfield, promoter Lou DiBella (who is in MARAVILLA) and director Bert Marcus. The discussion covered a great many subjects but always came back to some of the darker issues facing fighters. Why is no one watching out for them? (There is no pension) Why are the organizations manipulating who fights? (Holyfield probably shouldn't have had some of his fights) Why aren't they told to get accountants and lawyers they trust? Why do they have managers who largely do nothing these days except collect money? Why isn't there oversight?

There were lots of heavy questions, but sadly not a lot of answers. The one time sport of kings is too busy raping it's fighters in order to make money. Most promoters don't care, nor do the boxing organizations who only want to manipulate things to their ends. There was a sadness to the film and the talk because it's clear that so much needs to be fixed.

Seeing so many boxing films was both exciting because it's clear that the sport is still vital enough to warrant three films in one festival, but at the same time it was kind of sad since the stories told all were colored by the darkness of the sport, a darkness it desperately needs to get rid of if it wants to survive.
Posted by Steve Kopian at May 02, 2014