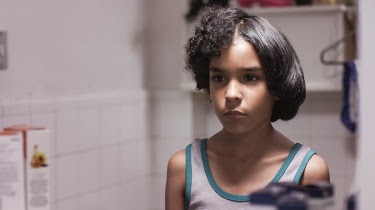 What an uncomfortable film.

Written up as a coming of age story with a heartbreaking choice in the Tribeca festival listings, the key word in the description is heartbreaking. This is a bleak little film that tries to have you leave the theater happy with an end title sequence that is pure fantasy.

The film tells the dual story of Junior and his mother who are living, barely, in an apartment in Venezuela. Mom has lost her cleaning job, thanks to a bone headed action of her son who takes a bath in a Jacuzzi instead of cleaning it. What follows is a collision of mother and son as Junior wants to straighten his hair for the school ID picture (he wants to look like a rock star) and his mother wants just have a life.

A mess of a film, this film is listing as being about Junior when it's really about his mother as well. about half the film or more deals with the mother trying to get a job or trying to figure out how to deal with her son who she feels maybe gay. Kind of. I say kind of because various plot threads come and go seemingly at random. The continuity is loose and I'm not sure where and how things play out. Frankly I have lots of questions about the whys and hows of the plot line.

Actually I have about ten pages of notes for the film. Taking that many notes- most in the form of whole paragraphs- is not a good sign since it means I'm not in the film but outside kicking it.

This is not a happy film. Life sucks for everyone on every level and it's clear these really are fucked up people. I don't say that lightly-nor will you once you see how the mother seeks to teacher her son proper gender roles.

By the end of the story I wanted to jump in front of a subway... only to be met by the WTF end credits sequence which is light and fluffy and what I thought for a while the end might be. What is it doing attached to the film?

What was I doing watching this film?

I don't know. Thankfully Chocko was at the screening which made recovering from the film easier.

Despite some great, bleak moments, I can't in good conscious recommend the film. Its too jagged and uneven to suggest you pay money for the film.
Posted by Steve Kopian at May 01, 2014