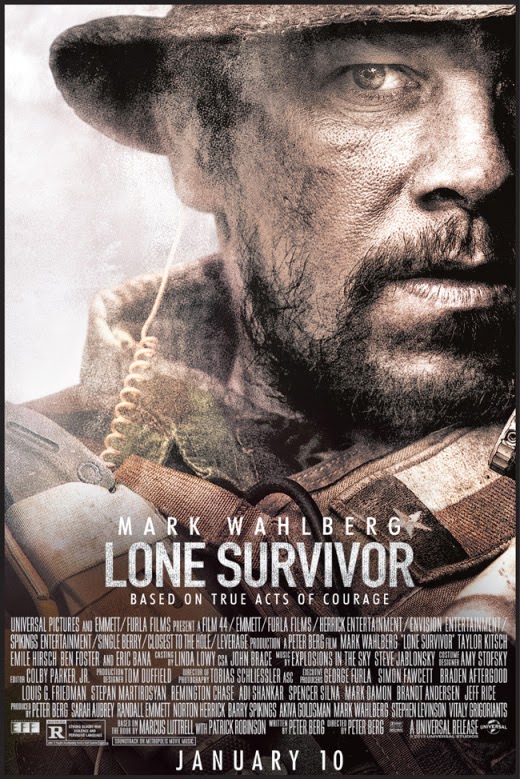 While watching Lone Survivor I began to ponder how it was that the military/war genres have survived so long when a vast majority of them simply pump out the same cliche's again and again. One would think that the genre would have collapsed under the weight of the sameness, but it hasn't, in some quarters its actually thrived.

The plot of Lone Survivor follows a group of Navy SEALS sent into Afghanistan in order to take out a high level member of al-Qaeda. When they are discovered by some of the villagers they are uncertain what to do with their prisoners. When one gets away and their position is revealed and soon the men are in the fight of their lives.

Its a very good film. Its full of tense action and guys you feel for. On it's own terms if you like war films you'll want to give this film a try.

On the other hand the film is also full of painfully cliche moments. All of the pre mission sequences are reduced down to short hand get to know your character sequences. Old school war films are always chided by using a cliche mix of characters (NYer, crook, literary guy, southern guy, outsider, ect) in order to get you to know who everyone was and to some degree that is what you get here. Each character is reduced down to a kind of short hand because everyone other than Mark Wahlberg gets lost behind the blood and beards. If you asked me who everyone was I couldn't tell you out side of Wahlberg.

On a larger scale we get that with most war films since its the only way to make the large number of similarly dressed guys stand out. In many people's eyes the only real flaw in Saving Private Ryan was that Spielberg reduced everyone down to cliches.  I would be hard pressed to find many films that down't descend into cliche- perhaps The Thin Red Line and maybe Blackhawk Down which suffers as a result.

I know the book that Lone Survivor is based on is much more nuanced. The men come off as real the real men they were and are, and not as characters. Yea I know movies are not books and vice versa, but it still drives home my point that its really not possible to tell a war story cinematically without resorting to short hand....

The thing that amazes me is that almost all the films use the cliche and ultimately no one seems to mind. Sure the cliches get passing mentions, but largely everyone just kind of goes with it. It doesn't really matter any more than there are stock western plots, what you're looking for is the nub that's different, that's what everyone will remember. Give an audience one thing and you're golden. When war films bomb, rarely are the cliches to blame for the badness, the cliches are pointed out as just one more thing.in a long line of bad things...

Lone Survivor's one thing is the hill side. The extended battle on the hillside is what sets it apart. With in that extended sequence all the cliches are washed away and the film stands up on its own. The film is still full of cliches, we just don't care because that piece is so good.

I don't know If I have anything more to say than that- but I suspect that's enough.