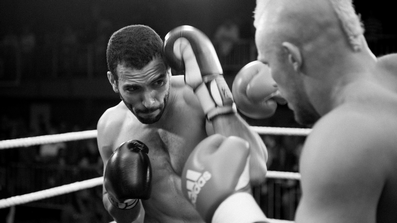 Jim Taihuttu's WOLF tells the story of ex-con Majid, the son of Moroccan immigrants to the Netherlands, he is adrift in his life. While showing all the trappings of getting along, he goes to his parole officer and . works at a flower auction, he is also hanging out with his friends pulling off small scale crimes. When a friend directs him to a kick boxing gym he attracts the attention of big time crooks who help him rise in their ranks and in the boxing world.

Shot in a moody black and white the film is a cross between a character study of a lost soul and classic film noir. Majid is your quintessential noir anti-hero, a not so bad guy who gets in over his head thanks in part to a dame (He beats a man who was with his girl to a pulp), boxing and some really bad guys who he thinks might be his friends. Of course it all goes wrong as these stories always do.

Marwan Kenzari gives a wonderful performance as Majid. He manages to get the wide swings of emotion from the love he feels for his younger brother, to the stark explosive violence of his nature that makes it nigh impossible for him to stop once he's throwing punches to the pure lust he has for his girl friend, right.  Kenzari manages to convey every emotion all the while having a kind of neutral expression. While he may tell his girlfriend he feels nothing, Kenzari manages to let us know that's not true- he feels deeply.

This is a solid little film that is helped along by being shot in black and white. The lack of color not only references to the lack of emotion in Majid's life, but it helps to set the film apart. There was a couple of moments early on where I was aware that the mere fact that the film was monochromatic set it apart from other similar films.

If there is any flaw in the film is that at 123 minutes the film is a bit long and perhaps a tad too brooding. This isn't to suggest that the film is bad, only that I would have liked one less time with Majid staring off into the distance.

If you don't mind the violence, there is a great deal of realistic nastiness in the film, I highly recommend you give the film a shot when it plays by you. The film is opening tomorrow in New York and LA and is worth your time and money.
Posted by Steve Kopian at May 22, 2014