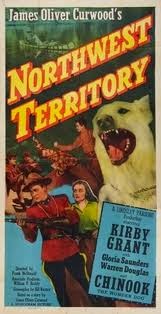 Watching the Corporal Rod Webb and Chinook series one thing is clear, the stories take place in a very violent location and the films don’t shy away from showing you the violence. Over the course of the few films I’ve seen to date people have been gassed, stabbed, shot (repeatedly), beaten up (repeatedly), attacked by Chinook (repeatedly), set on fire, thrown off a train (Yea I know it was a dummy but it was disturbing as the dummy collapsed like a real body would), thrown off a cliff and I won’t mention what happens to Chinook who also seems to get beaten into unconsciousness in every film. By what we think of classic film standards these films are very violent-hell even by today’s standards they are very violent. I was pondering the level of violence early into Northwest Territory as Chinook was tearing into another bad man, who earlier in the film had shot one of the characters and then set his cabin, and by implication the wounded man on fire. Say what you will these are cruel films.

The plot of Northwest Territory has Webb helping out an orphan named Billy to get to his grandfather’s cabin. As they approach the cabin they see the smoke and rush to the burning building where the Mountie pulls the dying grandfather out of his burning cabin. He says a few words and then promptly expires as his grandson looks on. This terrible act sets Webb and Chinook on the trail of some bad guys who are out to get the grandfather's secret oil claim- which means they are out to kill the boy and Chinook for good measure.

Watching a bunch of the films in this series it becomes clear that while they are extremely watchable, they are also not particularly complicated. The mysteries aren’t that mysterious from the outside. Everyone lines up neatly into good and bad, with the mastermind behind the theft or whatever being the person most obviously the suspect, say a mine owner stealing from himself or geologist going after an oil deposit. At the same time as you watch the films you begin to wonder how many people are actually tied up with the bad guys or what everyone’s true relationships are- Surprisingly many of the people involved tend to be somehow linked to the baddies. The writers seem intent on making all of the relationships as complicated as humanly possible.

So how is the film? Actually pretty good. Is it high art, no, but it is entertaining. I hate to say it but the whole kid in peril angle actually has some bite here since kids the films are so cruel you kind of expect the kid to get clocked somewhere along the way. Actually I like that the Warner Archive has put this film out out on DVD as part a triple feature. These films work best when you can watch a bunch of them at the same time when you can watch the rhythms of the series play out over several stories.
Posted by Steve Kopian at May 22, 2014