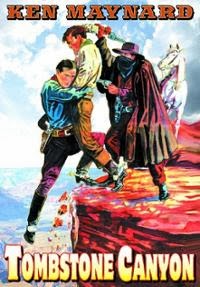 Ken Maynard plays a cowboy searching for his identity. Returning "home" due to a note from a friend Ken finds himself in the middle of  a bad situation . Not only are people taking pot shots at him but "The Phantom Killer" is taking out people .

To be perfectly honest I wasn't going to review this film. I was watching the movie and it was playing out so cliche and so been there and done that I couldn't in good  conscious recommend it. And then about a half an hour in something happened, I suddenly realized that even though the film was by rote there was something about the look of the film was special. The locations are not like the vast majority of other westerns with cliffs and canyons that don't seem to have been used to death. The finale is set on top of them and the fact it appears to have been shot on location adds so much to the film. There is danger, someone may go over the edge.

More importantly the film is filled with action. I don't think five or six minutes pass before some one shoots a gun, throws a punch or the sound of the cry of The Phantom Killer is heard. Things just keep moving along at such a clip you don't care that it's similar to what you've seen before, You're simply pulled along.

Is it great? No, but it is damn fun. Definitely worth the hour it takes to un-spool, especially since the film is available in several bargain collections.