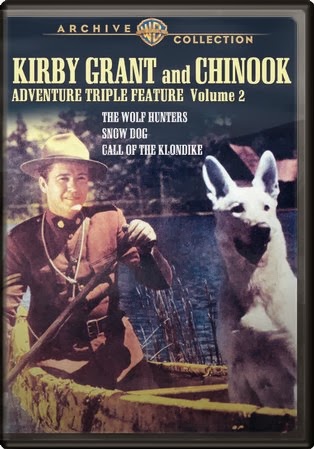 When the Warner Archive put the "Webb and Chinook" films out on DVD they collected them under the name The Kirby Grant  and Chinook Collections. Wading into the first disc I couldn't figure out why that was, I mean Grant plays Webb in all of the films. Then when I got to the second film on the second disc, this one, I realized that while the majority of the films in the series involve a character named Rod Webb, there are few where Kirby is called Rod MacDonald or Bob MacDonald.  I'm not sure why, especially since the characters in the films are exactly the same.

This time out a white wolf who is a dead ringer for Chinook is going around killing trappers. The people in the area call it The Phantom Wolf. When MacDonald and Chinook run across the wolf and some it's handiwork Chinook battles the wolf until the Mountie intervenes. The phantom flees leaving behind it's collar its clear that someone is behind the attacks.

While less cruelly violent than some of the films that followed this film is just as  action packed as the best films in the series with some great fights (including one where Grant gets his ass kicked) and some solid intrigue. This is the sort of grand adventure film that made me understand why this series went to ten entries.

I like this film a great deal. Definitely a reason to pick up the volume of Kirby Grant and Chinook films that this appears.
Posted by Steve Kopian at May 20, 2014