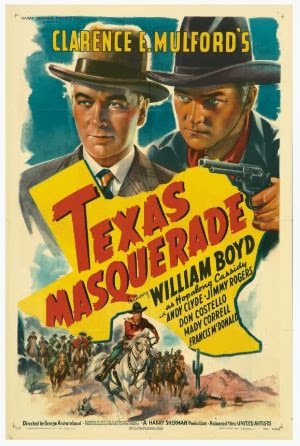 Having run through most of the later Lash La Rue westerns I'm going to finish out the week with a Hopalong Cassidy film. I'll be coming back to Hoppy in a few weeks when he gets a week of his own.

Someone is trying to force all of the ranchers off of their property. When they won't sell Maxson and Trimble send a band of outlaws called the Night Riders to burn them out. When one of Hoppy's new hires, Nolan, turns out to be a bad man out to kill a certain Corwin, a lawyer from Boston, Hoppy has him send away. Hoppy also takes the place of Corwin in order to try and get the goods on the bad guys. However when Nolan shows up in town things become complicated.

Hopalong Cassidy started out as a bad hombre in a series of pulp stories going back to 1904. He eventually made his way to the big screen where he became embodied in the person of William Boyd. Boyd, an criminally under-appreciated actor,portrayed Hoppy  in 66 feature films and a long running TV series. Boyd's Hoppy was a man of action and ultimate fair play, he neither smoke not drank and always fought for the down trodden. Boyd himself was man of fair play. Back when he was due to make an appearance in the American South, he refused to step out unless all the kids waiting to see him,regardless of color, were allowed in.

Texas Masquerade is a solid Cassidy film.  Like most of the films in the series its a great mix of action and suspense. For the most part the Cassidy films weren't just tossed off westerns in a repeated series of plot lines, they were stories that were gussied up enough that made you wonder how Hoppy and his friends were going to pull it all out.  Definitely worth tracking down.