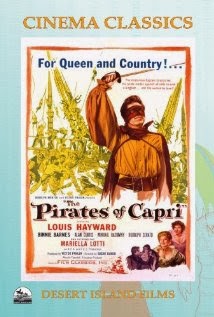 Pirates of Capri is also known as the Masked Pirate since the pirate leader played by Louis Hayward wears a mask. Hayward plays Captain Sirrocco who has whipped up the populace in order to get back some freedom from the crown. Captain Sirrocco is in reality the Count Amalfi and the events of the film concern the impending wedding of Amalfi to a member of the Queen’s court.

Large scale historical swashbuckler is a good time Italian produced spectacle. It exactly the sort of thing that Italy became known for in the period after the Second World War great looking films made on a budget. For me, who is much too young ever to see this on the big screen , this is the sort of film that was regularly shown on the Late Late Show.

The film is out on DVD from David Kalat’s All Day Entertainment in a special edition that included production photos and interview with director Edgar Ulmer’s wife and daughter. Kalat’s company has put out several DVDs as part of their Edgar Ulmer collection which is a series of releases that are trying to show the director in the best light possible.

While I’m not a basher of Ulmer’s, I am not what you would call a fan either. While there is no doubt Ulmer made some amazing films, his Black Cat is a favorite of mine, as are some of his 1950’s science fiction films (Man From Planet X, Beyond the Time Barrier) largely I don’t see what the fuss is all about.

You’ll forgive me for saying this but I don’t quite understand the way he’s considered an auteur by some people. While there is no doubt that he was a good director, capable of making drek into something watchable, the real fact of the matter is that he was ultimately an unremarkable director who managed to turn out an occasional really good film. Look at the body of work that Ulmer turned out and look at the number of really great films, there aren’t many. Yes there are some interesting ones but a good number of them aren’t really that good and are more interesting than anything (Journey Under the Desert anyone? Island of Forgotten Sins? Both are psychotonically weird). I know some people have argued that if only Ulmer had better resources and less studio interference, but at the same time that could be said about many other people as well. Why Ulmer and why not William Whitney or any other B director?

While I respect the opinion of people like David Kalat, especially since I know he’s actually watched all of Ulmer’s work, I kind of question the majority of other people who tout him highly since I doubt they’ve really seen his body of work.

And within that body of work Pirates of Capri stand near the top of Ulmer’s work. It feels like a film where he was allowed to make a film as he wanted and didn’t have to skimp. Definitely worth searching out.
Posted by Steve Kopian at May 30, 2014