Nightcap 5/18/14-another case of the best laid plans..., Godzilla and links 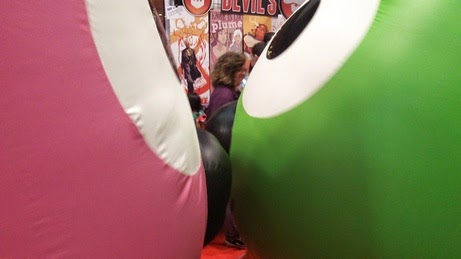 The best laid plans of mice and men…

The piece that was supposed to be here hasn’t gotten finished. Maybe next week. I was also flooded with a great deal of links earlier in the week that I figured I’d split them up with a midweek nightcap but the flood stopped and I only have a few.

So where does that leave this week’s Nightcap?

All over the place.

This week coming up are a week of Chinook and Kirby Grant Mountie films from Warner Archive. The films which were put out on two DVDs of 3 films are reviewed in roughly the order released. I’m only doing 5 of the six films this week. I’m hoping that Warners will do a DVD of the remaining films so I can get everything reviewed. That will lead into some war films for Memorial Day and then a week of “classic” action films. After that we’re going to be wading into the Open Roads Italian Film Festival , then KINO New Films From Germany and the Human Rights Watch Film Festival. We may get some coverage of the Brooklyn Film Festival in there as well.

Right now we are awaiting word on the final details on the New York Asian Film Festival and Japan Cuts. Trying to finalize plans when we don’t know what goodies these two great festival are going to throw our way is nigh impossible. What if we miss the one thing that is a must see that never surfaces again?

I’m hoping this is a quiet week with just some films and friends (and no bodies dead or near dead). If anything exciting happens I’ll be sure to let you all know…
---
Yesterday I saw the latest GODZILLA film. I loved it. I think its one of the best giant monster films ever made...and its potentially one of the best films of the year.

I completely understand why some people don't  like it or have been disappointed in the film, but having read the reviews and blog posts I have the feeling that most people are disappointed because of how the film is not what they thought it should be instead of what the film what the actually film is. I'll explain what I'm talking about when I pull together the piece that is rattling around in my head.
---
And now some links ala Rani
How the Fault in Our Stars become a social media sensation
Poop Like a Samurai
How trying to unmask a Twitter imposter blew up in a mayors face
The BBC on Godzilla
Letters from occupied France
Posted by Steve Kopian at May 18, 2014