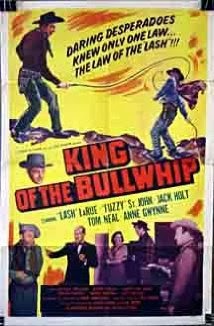 Lash and Fuzzy go undercover to find the identity of masked villain El Azote who,along with his gang has been staging robberies across the territory. Like Lash El Azote is a master of the bullwhip.

The opening titles of this film play over footage of Lash and the masked bad guy having a fight with bull whips. Its really cool and exactly the sort of thing that makes you sit up and take notice. When are we going to see the whole sequence? The answer quite simply is the end of the film. The long extended fight is probably the most exciting sequence in a Lash La Rue film. Running several minutes the sequence keeps you on the edge of your seat-I know I leaned forward when watching it. While the film may not be the best the best La Rue film is is the one moment that will stay in my mind from the La Rue films.

Sadly this was largely the end of the La Rue series. The four films that follow (Thundering Trail, Vanishing Outpost, Frontier Phantom and Black Lash) were constructed of footage from the earlier Western Adventure Production films, with two Frontier Phantom and Black Lash essentially earlier films with a couple of minutes of new footage for wrap around. (their repetition of footage is why I didn't review them here at Unseen- I should mention that the later films are good assuming you haven't just seen the earlier films as I did.)

One of the best of the series is a grand way to go out. It's good enough to make you wish that there was more real adventures for Lash and Fuzzy to enjoy.
Posted by Steve Kopian at May 08, 2014