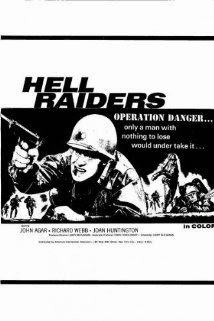 Larry Buchanan remake of the truly awful Suicide Battalion (A review is coming during out Thanksgiving Turkey series in November) is far from a great film, hell the Riff Trax or Mystery Science Theater 3000 guys could have a blast with the film, but it has a certain no rent charm.

The plot of this so bad it's good film has John Agar taking a small band of demolition experts into the Italian countryside to blow up a building that has been going back and forth between the American and German sides. The last time the German's took it they left behind all sorts of vital plans. While on R&R before the mission romance blooms, but the Germans come calling.

One of the no budget productions Buchanan made for AIP with the intention of them being sold to TV. A few escaped and got theatrical release. Looking more like a bunch of men playing dress up in the woods out back then men at war, the film scores a few points in its earnest drive to at least pretend this is all for real. Yes you will be laughing and groaning a great deal but you will kind of get caught up in it all.

I don't recommend getting the film on its own-however Timeless media has it out with 4 other films for about 5 bucks and in that case i'd go for it.
Posted by Steve Kopian at May 24, 2014