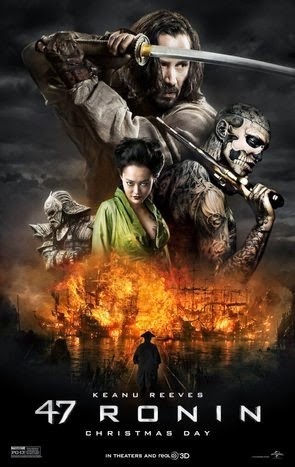 The recent big budget rethink of the 47 RONIN was a box office disaster.  It was reviled by most Asian film fans from the moment Keanu Reeves was cast. It then kicked around for several years as the extensive CGI was done and reshoots tried to straighten out the plot. Once the trailers hit and everyone saw the monsters hopes were dashed further and any hope of it ever making money was pretty much gone.

I've seen the film and to be perfectly honest, its not bad. Its not the legend of the 47, but lets be real, how many more straight retellings do we need? Not another one, please god, no.

The basic underlying story has the 47 retainers of a disgraced lord getting revenge on the family that framed their leader. Once the injustice was exposed and good triumphed over evil they all committed suicide for their plot. Its a moving story about loyalty and honor.

And its been done to death. The thought of seeing another straight version doesn't thrill me.

Which brings me to the current Keanu  Reeves monsters version- it ain't half bad. Is it great? No, but at least its an effort to try and do something with the story. I know some would argue that we don't need the story to be changed but lets face it there have been countless plays, novels, films and TV shows about them, why not try to bring something new to the table.

I think assuming you approach it with an open mind, this rethink works. I know the monsters put most people off but if you moved this to another time and place other than Japan no one would have batted an eye, except that the story is so rooted in the Japanese culture that resetting it elsewhere would have been difficult. You'd have to set up a world where the idea of loyalty unto death on this scale would be believable.  Keeping it in Japan makes it easier to believe.

I don't think the film is perfect. I think its too big a story for its running time. Its juggling so many characters its hard to know who is who without a program. On the other hand it has some great action sequences and moves along at a good clip. Even Reeves, who many people hate doesn't do any damage since while he's on the not always front and center. This is the clan's story not his.

I think this film is wrongly maligned. Yea it's not perfect but at least it's an effort to make the story live for a new generation.
Posted by Steve Kopian at May 15, 2014