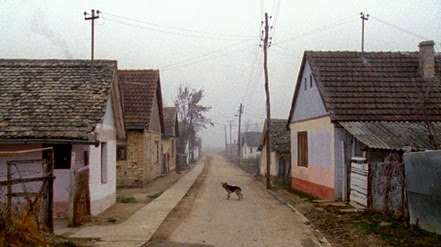 What is this film doing at Tribeca? This is the sort of film that normally plays at the Avant Garde section of the New York Film Festival. I'm guessing this is going to end up lost on the downtown audience.

Director Matjaz Ivanisin retraces the footsteps of  director Karpo Godina's journey 45 years earlier on a trip he made across Yugoslavia. Revisiting old locations we see them old and new.

Largely a landscape film interspersed with old footage this is lots of shots of various locations with new narration over them. Additionally there are some interviews interrupted by the narration. The narration is very funny and extremely clever.

The trouble is that this is a 49 minute rambling film that goes nowhere. Nothing builds, its just a series of bits strung together. Its amusing for a while, but even at 49 minutes the lack of real narrative thrust makes this the sort of thing that is best seen in a museum where you can wander in and out. Frankly had it been any longer than 49 minutes I would have wandered out.

Witty narration aside (I'd love a copy of it because of all the great turns of phrase) I'd skip this.
Posted by Steve Kopian at May 04, 2014