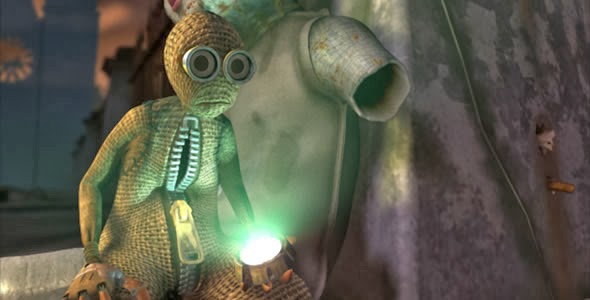 Shane Acker's original film that was the basis of the now big budget animated film. Running some 10 minutes the film concerns 9's battle with a patchwork monster that has been stealing the souls of his brethren. Its silent except for sound effects and its clear why Tim Burton produced a feature film version since the film is full of possibilities.

As it stands now its a tightly paced beautiful to look at film. Its the best sort of film in that its reality bleeds off the screen and you very easily believe this is a real place and really happening. Acker's animation is extremely masterful. Watch the little motions of 9's body as he moves. There are small touches, gestures, shifts of weight that demolish any notion that we are watching anything other than real being.

A small masterpiece. See this if you can.
Posted by Steve Kopian at May 17, 2014