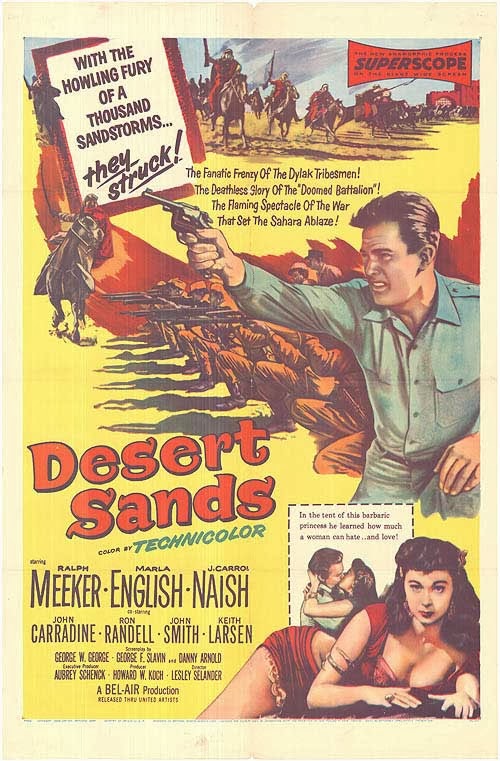 What a cheesy movie-and I mean that in a most affectionate way.

Desert Sands is a half-baked desert film about a brother and sister whose father was killed by members of the French Foreign Legion. The pair then grew up plotting revenge, a matter complicated by the girl falling for a Legionnaire

Exactly the sort of movie that they don’t do any more and which a couple decades back would have been a staple of late late late night TV this twisted little film suffers from a soap opera plot and wooden acting. Yea it has John Carradine chewing scenery as the evil uncle of the siblings (he killed his brother so he could manipulate his nephew into driving the interlopers out) but everyone else is stiff as a board. Yea it’s silly but in a so bad its good sort of way.

The selling point of the film is the action especially the final half hour which has the ill defended fort taken over by baddies who are planning on ambushing a column of Legionnaires. A huge battle sequence occurs, which is exciting on its own terms, but absolutely hypnotic as you realize few of the shots match, logic has gone out the window and bad guys keep getting shot and falling into the exact same pile of hay over and over again. I was so taken with it that I had to hunt the film down to watch it all over again (It’s on Amazon streaming).

Art doesn’t come into any discussion involving this film, however fun does. This is a curl up on the couch and enjoy film.
Posted by Steve Kopian at May 27, 2014