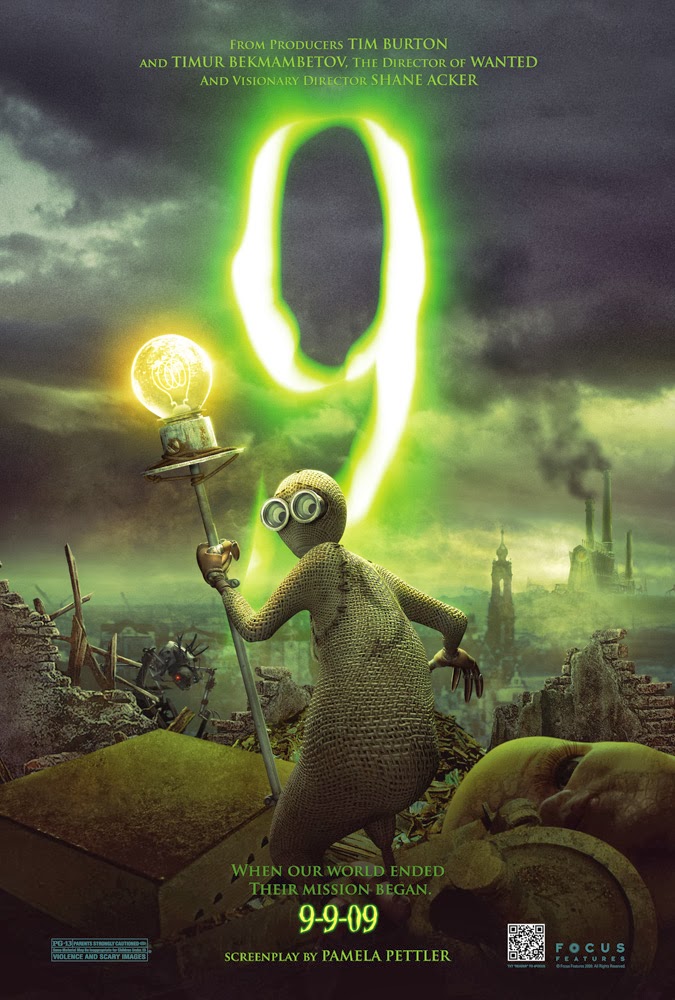 It's the end of the world and what is left is truly bleak place. Into the landscape comes 9, a rag doll like creature made by a scientist. Wandering out into the wilderness of what is left from the man/machine war he finds that he is not alone. There are 8 more like himself. Unfortunately also lurking in the wastes is a horrible monster.

Sean Acker's expansion of his Oscar nominated short is a visual feat. Acker has created a very real very tactile film. This could be our world tomorrow. Looking at the eye popping landscapes one is struck not only by their bleak beauty but also by a certain amount of sadness as to what brought us here. I think for the most part the expansion works. The short, which basically concerned 9's battle with the monster is turned into something more, a struggle for survival on a larger scale. There is more drama and much more action. The film improves as it goes on as bits and pieces fall into place and tapestry of the tale becomes less and less like anything that has gone before.(For a while I thought this was going to be something similar to other films but in the end I was wrong. Likewise I was wrong about the visuals being all, there is a real story in this film's hear and the visuals are part of the way the story comes across)

If there is any problems with the film, its that the film is too short. Shorn of its end credits the film is just over 70 minutes. The running time itself isn't the problem, the problem is that there are several times when the film seems to have left something out, that things have been skipped over. To the films credit the film's world bleeds off the screen and you never doubt it's a real place, but at the same time there are some bumps in the telling in the later part of the film that made it feel like Acker and his crew made a jump based on what they knew, unaware that it wasn't completely clear in the film. I can't explain it, partly because to do so would reveal plot points, and partly because its kind of hard to explain what exactly is missing.

Flaws or not this is a film that needs to be seen if you like science fiction or fantasy. Its a spectacular film that really should be seen as big as possible for maximum effect. I think you really will like this. (Hell, if nothing else it may change your mind about Over the Rainbow)
Posted by Steve Kopian at May 18, 2014