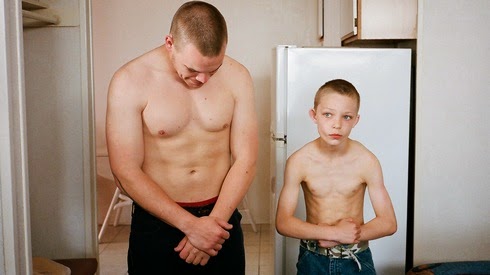 If you walk into this film with out reading the official synopsis there is a good chance you will do one of two things- leave, as many did during the press screening I attended; or you will try to fall asleep as the remaining writers tried to do. Without the guide of a synopsis to link everything up this film is a series of random events that kind of go nowhere.

The plot, as much as I got from the film has a young boy and his older brother out raising hell. When their outing with a pellet gun goes sideways they somehow end up in fight with two girls riding ATVs. When the fight goes against the older boy the younger one brains one of the girls with a baseball bat dropping her (and possibly killing her?).  The boys flee. Their mother finds them, brings them some stuff, some money and her car and sends them on their way. They travel first to their sisters house who throws them out after one night. They go to a seaside resort and get mixed up with a maid with a crazy boyfriend. They then end up at a summer home with an old man who is the caretaker. He eventually takes them to be part of a Viet Nam war re-enactment.

Little is said. We have no idea who most people are or whats going on because no one says a useful word. Scenes begin and then suddenly fade to black with the next sequence being some other place and time. Where are the boys going? No idea. Why? No idea. What the hell happens at the end? No idea.

Clearly the film means something to the director. It makes sense to him, after all he made the film. The trouble is that this is a series of sequences that don't link up. Things don't make sense as a whole because we're not given anything to connect the bits up.Things like who is the old guy, or why is the maid the only one who helps them-or even where did she come from- are never explained in the film.

I lost patience early. The obnoxious older brother is very hard to take. The actions of the mother sending them on their way is bizarre (why does she have a table full of pepper? Why does she act as if her kids braining someone is no big deal?) Things only get worse. It doesn't help that no one talks, and when they do they say very little that's helpful.

On the train home I read the official synopsis and got clued into some things-almost all of which are not mentioned in the film (The old man being the boys father is listed in the end credits though he doesn't seem like their father).Yea, the film made more sense- but as I've repeatedly in my reviews you can't make a film that needs a cheat sheet since 95% or more of the audience will never get to see it. My low opinion of the film got lower.

One of the least films of Tribeca. You need not see it unless its as the guitar picks the prints should be turned into.
Posted by Steve Kopian at May 04, 2014

Email ThisBlogThis!Share to TwitterShare to FacebookShare to Pinterest
Labels: american, drama, not worth the effort, tribeca 2014