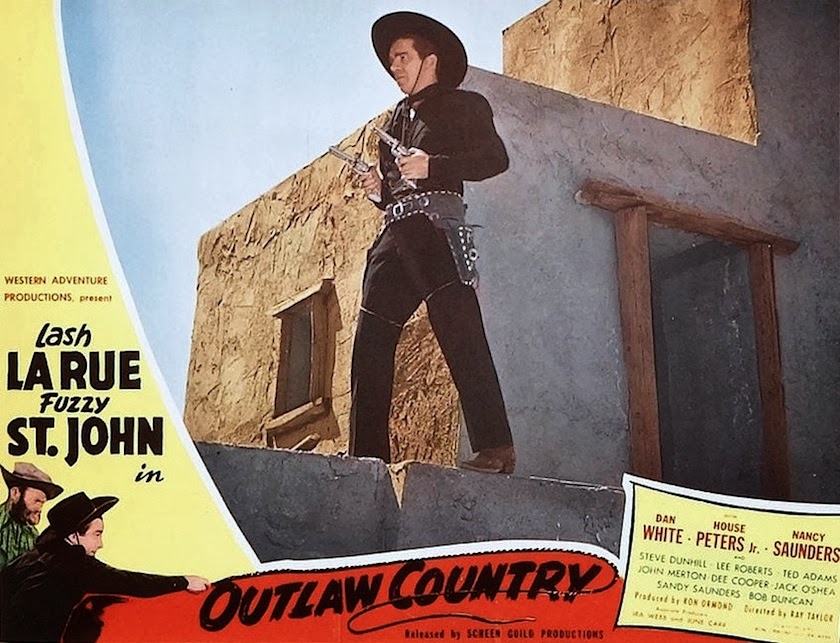 Outlaw Country
Lash and Fuzzy are put on the trail of counterfeiters running five dollar notes over the border by some bad guys. Everything should be a cake walk for the pair but Lash is constantly being mistaken for one of the bad guys known as the Frontier Phantom (who turns out to be Lash's brother). As Lash tries to out run the posses out for the Phantom's blood Lash and Fuzzy struggle to stop the flow of bad cash.

While the film has plenty of action it kind of suffers in one key area, namely the film is much longer than  it needs to be. Actually its a good 10 to 20 minutes longer than many of Lash La Rue's other films. I wouldn't mind except that there doesn't seem to be a reason for it except to squeeze in lots of chases and horse riding. While the pleasure of the La Rue films is the non-stop action, I don't count horse riding as action and the film could have lost some of the horse action.

Worth a look if you see it as part of a collection, but on its own there are better La Rue films.

Mark of the Lash
US Marshall Lash LaRue and his side kick Fuzzy Jones aka Fuzzy St John are summoned to a small town called Red Rock, where one of the ranchers, Taggart, has seized control of the water. If anyone wants to water their cattle they have to pay a dollar a head. On top of it Taggart and his men have been killing anyone who gets in his way, going so far as to use a trumped up charges and kangaroo court.

Action packed film is a great deal of fun. You have really bad bad guys and really good guys and it makes for some dynamic clashes as you can't wait for the bad guys to get whats coming to them.

For me this is almost a truly great western, it falls down in one key plot point which is Taggart and his men have killed off either by gun fire or lynching several law men sent to investigate matters in the town. How this has never managed to cause them any problems or resulted in an army of law men coming to town is beyond me. Yea I know one shouldn't think about the plots of these programmers but its almost too much to let go.