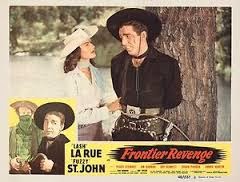 Solid if by the numbers Lash La Rue adventure has Lash and Fuzzy taking on the identities of two hombres from Texas by the name Dawson. Actually they simply use one of the Dawson's legendary belt buckle and let's everyone infer who they are (they claim to be guys named Jones). Lash and Fuzzy have been sent to a small town to look at what a man named Deuce Rago is up to. It seems in an area rife with robbers and bad guys Rago is the only one who hasn't been affected.

Full of nonstop action and pithy lines this is a sold little western. To be certain that the film isn't particularly plot heavy, but at the same time it just goes pretty much from the first frame.

One of the things that I like about the film is that it sets in stone just how bad an hombre Fuzzy can be by the simple fact that early in the film he marches the two Dawsons into his boss's office by himself. If there is any doubt about how capable he is the fact that Fuzzy brings in the guys alive by himself speaks volumes.

If the film has any flaw its that the plot is a bit to by the numbers. You know how it's going to go a bit too much. Its not fatal, not even close, rather it's just surprisingly lacking in surprises.

Minor reservation aside definitely worth your time and a bowl of popcorn on your couch.
Posted by Steve Kopian at May 06, 2014