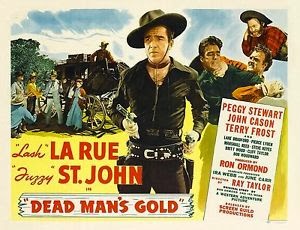 With Tribeca done I needed to get away from any notion of the festival so the films of the day this week are all program westerns-mostly from the great Lash La Rue.

First of the independent Lash La Rue films has Lash, the man who taught Harrison Ford to use a bullwhip, more or less playing himself instead of Cheyenne Davis, the character he played in a series of films produced by PRC and shot at Moongram studios. Not that you'd really notice the change all that much except that these later films got a tad meaner.

Taking no chances with upsetting the formula that had worker previously the plot is pretty straight forward with Lash and side kick Fuzzy Jones called to help a friend who seems to be in trouble. When the pair arrives they find their arrival unwelcomed and their friend missing. Their friend's niece calms things down. It doesn't take long before Lash and Fuzzy find that all the trouble involves gold.

The film's oh wow moment comes early on when Lash whips a shot glass out of a bad guys hand. The kicker comes when Fuzzy catches the glass and remarks "You know lash there was a time when you'd have done that and not spilled a drop." If that were really possible I'd love to see it.

A solid little film full of action this is exactly the sort of well crafted film that made the program films of the 30's and 40's so popular.
Posted by Steve Kopian at May 05, 2014