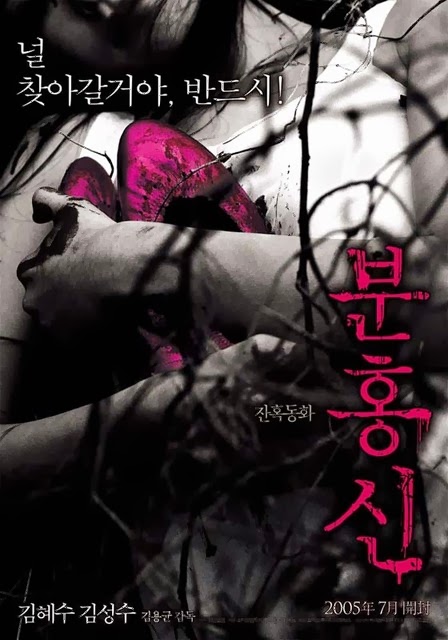 Actually they are more shocking pink, but the tale of obsession and possession and madness starts (after a killer opening) when a woman discovers her husband is having an affair. She moves out with her daughter into a new apartment. She discovers a pair of pink shoes on a subway and its all down hill from there.

Dark, bloody (its rains down in gallons) disturbing film is a good thriller for most of its running time. The dark imagery is truly frightening and disturbing even if the tale, ultimately, makes no sense. There are things in this film that really bothered me even if they may have been over done. Visually this film is great, it will curl your toes at times (The opening in the subway is truly classic and one of the best things I've seen all year. I've seen it a couple of times it still delightfully, freaks me out). The story, which echoes the classic story and events decades earlier in the films time line, really doesn't work. The problem is that as long as it doesn't have to explain anything this film is fine, however once it has to begin to wrap everything up it stops working. Its juggling too many implausible things to explain neatly. I like the pieces of this film much better than the whole thing.

For those looking for an Asian Horror film that isn't long haired ghosts this film is worth a look (You want to see the opening). I'd rent it or see if cable runs it before you buy it.
Posted by Steve Kopian at May 31, 2014