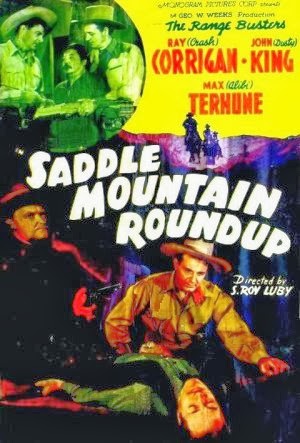 Maytbe I should stay here and hold the horse

Old man Magpie Harper is afraid that someone is out to kill him. In the hope of keeping him safe he sends for the Range Busters- Ray Crash Corrigan and Dusty King. However before they can get there someone makes good and kills Magpie. It soon becomes apparent that someone will stop at until they get their hands on the cattle drive money.

Rated as the best of the 24 film Range Buster series this film plays like a weird cross of an old dark house film crossed with a western. Hitting all of the typical dark house tropes (murder, a will, hidden rooms and secrets) it twists and turns them in some unique ways, including Max Terhune's Alibi who wanders through the proceedings carrying a ventriloquists dummy named Elmer. (Elmer by the way lists as a character at IMDB with 55 films to his credit). Of course there are some horse back chases, gunfights and typical western action but largely this is a mystery, and a good one.

I've seen a couple of the Range Buster films over the years and for the most part they are pretty good. They are your typical western programmers spiced up with good characters and just the right mix of comedy and action.  I would have to agree that this is probably one of the best, but then again I'm partial to mysteries. My problem with the program westerns is that unless you are a scholar or a die hard western fan the best you can do is simply say if something is good or not, Saddle Mountain Roundup is really good, so much so that I'd gladly put it on again.