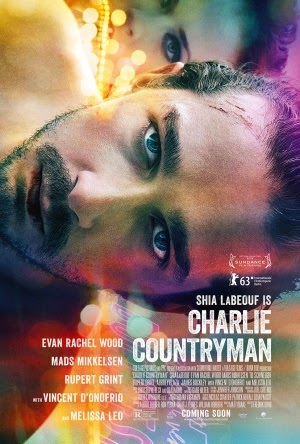 The Necessary Death of Charlie Countryman came out at right about the wrong time for it to ever find an audience. It arrived just about the time that all of the nonsense surrounding star Shia Lebeouf plagiarism crap was creeping into the papers.  As the plagiarism was revealed the film spun off into a kind of oblivion despite getting decent reviews.

The film follows Charlie Countryman, a young man kind of adrift in life. The film opens with him and his brother going to be with their mother has she is taken off life support. As she dies, Charlie sees her spirit leave her body. When he flees into the hall way he is confronted by his mother who suggests he take a trip to Romania. While on the plane Charlie makes the acquaintance of Victor a middle aged gentleman returning home after seeing a Cubs game in Chicago. During the long flight Victor dies while sleeping on Charlies shoulder. Before the body can be moved Victor begins to talk to Charlie and asks him to take the hat he bought for his daughter to her. Charlie agrees setting up a romance and his decent into a dark underworld lorded over by Mads Mikkelsen.

To be honest it's not a bad film. Its really not. if you accept the stylistic choices which at times can be a tad showy. To be honest I liked it way more than I had ever thought I would. For me the real problem with the film is the casting of star LeBeouf  who doesn't seem to have the weight to pull it all off.

I am at a complete loss to explain LeBeouf's career. I understand he was a Disney kid who had one or two good roles (I love Disturbia) but outside of that I got nothing if you asked me why he's a star or at least a name. I freely admit that I have said some terrible things about him, but at the same time can anyone explain to me any role that he's had that he's actually worked in?

Okay Disturbia, How about another one?

I'm looking at the list of his roles and he has either had nothing to do (Transformers) or was terrible (Indiana Jones)  or wrong for the role (Wall Street). Either he is picking bad roles or he has limited talent and just kind of looks good.

I think it's the limited talent. I say this because there are times in Charlie Countryman when he kind of is good  (I mean I liked the movie) but some of the emotional requirements elude him. He can look like a punk ass uncaring guy but when he has to emote about his mom or some of the other stuff he comes off as kind of silly. Its all large puppy dog eyes and quivering lips.

Its obvious that someone likes him, but I don't know who. I'm not too sure its anyone in the audience since I have never heard anyone ever say they wanted to see a film because he was in it. I've never seen him listed as a cause that a movie actually made money. I mean there is a new Transformers movie coming and the fact its a Transformers movie is the big deal. The fact Shia's not in it doesn't enter into it.

Purely based on his body of work as an actor I don't know why he has a career. Yes the PR people push him, But beyond that why?

Perhaps when and if the plagiarism and I'm not famous nonsense goes away he can find a role that will make people sit up and take notice, but for right now, looking at the body of work he's put out there I'm forced to ask, how the hell did he ever get into a position where I'd even debate his existence?
Posted by Steve Kopian at May 16, 2014