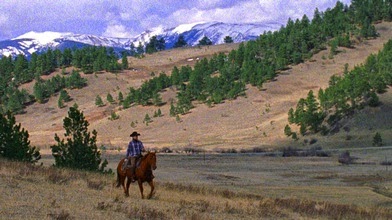 Badly named completely unnecessary documentary about life on the the Fish Tail Ranch. If you've ever seen a film on ranching then you've seen this all before.

Following two ranchers as they tend to cattle, feed them, tag them, castrate them, birth them, and make sure they are okay at night before taking the kids out to do a pit of shooting.

This hour long film is shot either in beautiful panoramas or up close up so that we duck when the bull testicles fly. We hear some of what the men say to each other but most we listen to over loud music or occasionally some quotes or song from actor Harry Dean Stanton.

There is nothing here that hasn't been seen before in any of several dozen other better films, many of which have played Tribeca (one guy at the screening commented that you really know you're at Tribeca when you see an animal give birth.)

Give the filmmakers points for shooting on film, but take away eight million more for making a film devoid of reason to exist.

Unless you've never seen a documentary on ranching you can skip this film.
Posted by Steve Kopian at May 03, 2014