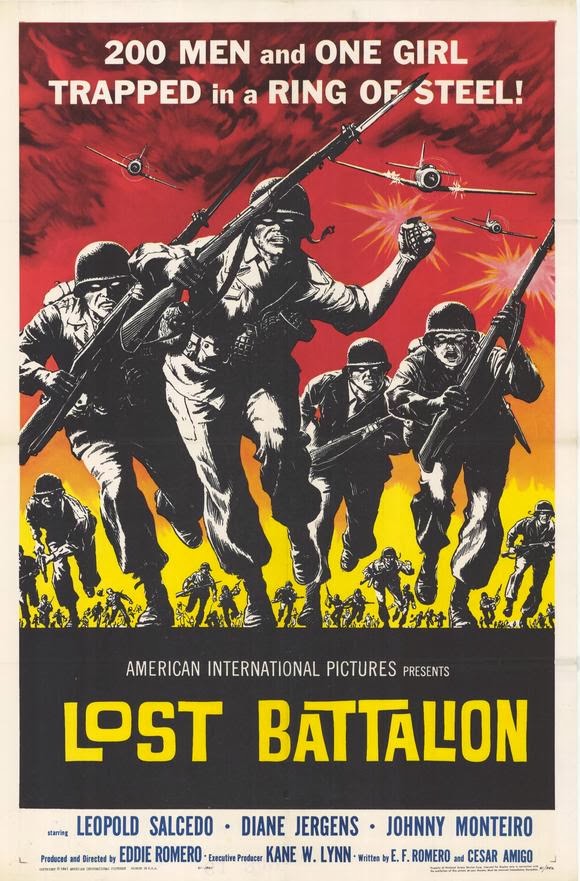 Odd war film from the Philippines and that unsung filmmaker Eddie Romero concerning a band of guerrilla fighters battling back against the Japanese right after their invasion of the country. While not what you would call a good film, its just okay, the film’s odd structure makes it worth taking a look at.

I had picked this film up as part of a Timeless Media quadruple feature DVD for five bucks. I’ve always liked war films and I hadn’t seen three of the four films. Since the case didn’t list the running time and because of how the film was playing on the player wouldn’t reveal the running time, I checked it out on IMDB (it runs 80 minutes). In looking over the IMDB info I read how one reviewer mentioned the three part nature of the film and it was something that stuck with me when I saw the film.

The first part of the film is a five or ten minute newsreel explanation of the invasion of the Philippines by the Japanese. It lays out the whole situation and eases us into the main part of the story which has the population forming bands of armed men to fight the invaders. The Newsreel segments appear periodically through the film and lend it a sense of immediancy and urgency that the rest of the film some times lack. These segments for better or worse give the film a weight and a seriousness it might otherwise have.

The second part of the film concerns the battle against the Japanese. We watch as the Filipinos form a fighting force and take on the invaders. We also get the story of some American civilians who think that they will be fine if they just surrender to the Japanese. They are convinced of folly of that way of thinking and they end up going out into the bush. During this part of the film we get some pretty good war film action as we see the cost of the war and the attitudes people had during the occupation (the guerillas kill a woman who was involved with a Japanese soldier). It’s a solid war is hell tale that's nicely gritty.

The third portion of the film is the romance between an American girl and one of the fighters. It’s a touching but doomed tale that seems shoe horned into the film in order to give the film something for everyone. Its not bad but it feels gratuitous, especially since the girl is beautiful blonde.

As a whole film this is pretty good. It’s the sort of film that reminds me of either a rainy Sunday from when I was growing up or the sort of film I used to run across on the Late Late Show
Posted by Steve Kopian at May 25, 2014