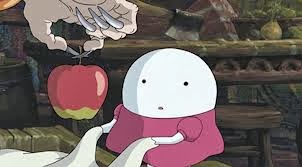 The plot of the film has an ugly witch returning home with a basket of eggs. When one of them doesn’t crack she gives it legs and arms and turns it into a helper. A short time later after the witch as gone to bed the egg gives a living batch of bread dough some eyes and the pair then make their escape from the castle. In the morning the witch gives chase.

A lovely smart wonderful story of friendship it’s a distillation and riff of all of many of various Ghibli moments. If you've seen the earlier films you'll recognize bits of it with characters out of Spirited Away, flying sequences that echo any number of other films,  castles and a village out of Howl's Moving Castle and on and on.

One thing that I loved from a visual stand point were the rabbits. What an absolute joy it was to see a bunch of characters in a Miyazaki film that don't look like every other Miyazaki character. (That's the one thing I hate about Miyazaki's films you can interchange all his characters)

For me this is the best film since his previous short film (Mon Mon the Water Spider- which may very well be his best film.