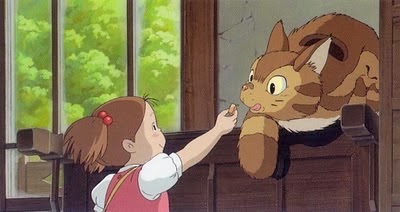 Why is it that the short films that Hayao Miyazaki has been turning out over the last few years so much better than the full length films? I’ve seen a good number of them and to be perfectly honest that they are so much more satisfying than the more heralded and better seen films.

When Mei and the Kittenbus was announced as existing I went nuts. The thought of a catbus film was almost too good to believe. I mean the damn catbus is one of the cooler moments in My Neighbor Totoro, how much cooler could a whole film about a baby catbus be? A great deal.

The short finds Mei from Totoro noticing a whirl wind going after one of her candies. She manages to grab it and bring it insde her home where its revealed to be a baby catbus. A piece of candy and the pair are fast friends. Later that night the catbus returns to take – on a ride and it’s a pip that includes more catbuses and Totoros.

Seeing it put a huge smile on my face. It made me feel good.

I love it when Miyazaki makes short little nothings like this. I love when he throws himself into these trifles, the small moments that kind of aren’t the deep meaning of it all, but just are incredibly cool. This short is incredibly cool. Its just two kids bonding and finding each other and a place to be friends. It’s a small slice of what it means to be a kid. It’s the sort thing that can very easily remind a very jaded adult what they used to be like.