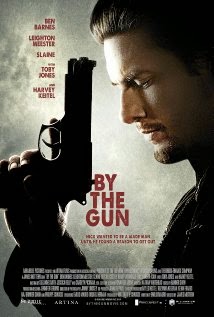 This is just a small little review in passing. I had been given a chance to review BY THE GUN by the PR people but took a pass. It didn’t really interest me. However I ended up seeing it anyway and because the film comes out tomorrow on DVD I thought I’d say something.

The film is the story of an up and coming mafia soldier who begins to get in over his head. When his cousin has a run in with the daughter of a big fish Mafioso at a bar the situation escalates quickly. Stepping into help his cousin, Nick, our hero finds he has to make amends all around, a situation made worse when he realizes just how big a dick the big fish is (granted no one likes him, but he makes money so he gets deference)

Well-acted, well-made mafia story isn’t bad as these things go but it suffers in two areas, first this really isn’t anything we haven’t seen before. This is the sort of story that we’ve seen before which is going to make it a tough sell to the only audience who is going to be interested in it, hardcore crime film fans. Why watch something that plays out like something we’ve seen before.

The other problem is the film is paced a tad too slow. There are some good character building scenes in the first half hour, but outside of the scene where Nick tries to apologize to the dicky gangster in a speedo there isn’t much here and I started to surf the web. (and frankly the bad guy is too clearly drawn as a bad guy). I did make to the end of the movie but I’ll be damned if I can tell you what happened.

If you are a hardcore mafia movie fan give it a shot, otherwise wait until it hits cable
Posted by Steve Kopian at January 19, 2015