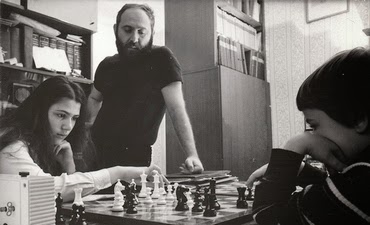 This is the story of the Polgar sisters, Sofi,  Judit and Zsuzsa who were raised by their father, Lazlo, to become geniuses and world chess champions.

Lazlo, a teacher by trade, wondered what would happen if he trained his kids to be the best in the world.  Forgoing regular school, Polgar had his daughters training from early in the morning until late at night learning everything there was to know about chess. At first the chess mavens in Budspest thought it was cute joke until the girls kept beating all comers.

The film follows the girls from their birth, through growing up in Communist Hungary until now when the girls are in the US, Canada and Budapest. The film not only highlights the girls lives but also changes with in the Hungary and the various chess organizations which were male dominated until the Polgars showed up

This is a solid and entertaining film  that plays kind of like one of the best Discovery Channel documentaries. Its a really cool look into another place and another mind set- that of the the chess champion, which is a weird place to be. Its facinating to see how the girls were raised and to realize that in the end the actually seem rather normal,

The film screens with Salome's Nose on Thursday the 15th and and January 22nd.For more details and tickets go to the film's festival webpage here.
Posted by Steve Kopian at January 14, 2015