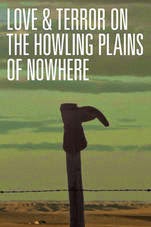 LOVE AND TERROR ON THE HOWLING PLAIN OF NOWHERE was one of the great films at 2014's DOC NYC. Its a film that is about way more than it's subject and the sort of film that you'll want to talk about for days after you see it-and then you'll want to watch it all over again so that you can see what you missed.

Its a film that is truly special and one that anyone who loves really good films  should see.  And you can when the film hits iTunes and VOD on Tuesday February 3

Here's my review from DOC NYC:

When college professor Steven Haataja's remains were found nine months after disappearing there were a lot of questions, like how did he end up in the middle of nowhere charred beyond recognition, and bound in such a way that suicide seemed unlikely. The lack of physical evidence was owing to the body being out in the wild through a particularly brutal winter. With little in the way of concrete answers speculation was rampant.

On the face of it LOVE AND TERROR ON THE HOWLING PLAINS OF NOWHERE is a look into the disappearance and ultimate death of college professor Haatja. What it also is is an existential examination of life, the universe and everything that brings in everyone from Leonard Cohen, Tolstoy, Orson Welles, Tarkovsky, Carl Sagan to any number of other people including many from the town of Chadron Nebraska where it all went down. It’s an a 105 minute digression that sucks you in and drags you along.

The film is set in motion when best-selling author Poe Ballentine, aka Edwin Hughes in real life, decided to look into the death of Haatja as a means of finding closure and justice for the man’s family. The film then spirals out into an examination of Haatja‘s life and that of the people in the town. The film then goes off in odd but very related directions that examine how we all look at life and our place in the universe or even just in our home town.

It sounds weird, but it works. The mix of stories and philosophy comes together into a film that’s like hanging out with friends in a coffee shop and shooting the breeze. Stories and comments ping off into something else which goes somewhere else which leads back to the place we started. It’s this huge round robin game that always goes back to the life of the dead man.

The trouble with writing on the film is that there are so many threads that you could write a book on the film with each thread and each character being a chapter. The thought of paring it down is difficult, what do I mention or leave out, the ex-detective  now forensics instructor who got in trouble for revealing too much to the press? Hughes's possibly autistic son, who doesn't seem like he belongs but does? How about the various grad students? The bartender? The film clips? I wouldn’t know where to start. There is so much going on that the film really needs the full 105 minutes to get it all in (The film plays out through the end credits).

Basically you just need to see this film.

This is a film for anyone and everyone who not only wants to engage with the film, but talk about for the five hours after the end credits end. This is is the very definition of a conversation starter- which is why I shouldn’t tell you what’s in the film and instead I should have you just see the film.

To pre-oreder the film now on iTunes or order it after February 3 go to the film's iTunes page here.
Posted by Steve Kopian at January 31, 2015