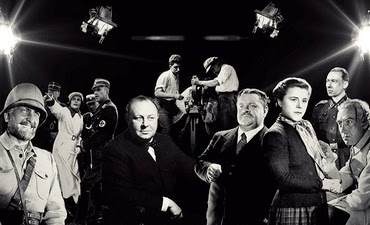 Felix Moeller's look at the largely still banned films from Nazi Germany is a film I'm very mixed about. While I applaud his making a film that will start discussions, I am bothered by how much he leaves out, worse I intensely dislike that the film largely is operating in a kind of vacuum where the films discussed have no connection or no counterparts anywhere or any when else.

Broken into sections  as to the type of films  Moeller's film looks at some of the 40 films (once 300) banned after the Second World War in Germany (though that isn't made clear the film simply says the films are banned). The film mixes talking heads of scholars, film historians and a Neo Nazi recruiter with clips and discussions of the films following screenings to ponder whether these films should be banned and what effect releasing them on the public would have.

While the subject is intriguing  the film is deeply deeply flawed in it's execution. The problems begin early on when the film throws up stats to show the power and popularity of the the films by comparing movie viewership numbers from the war years to modern day viewer ship. There were ten times more viewers for a film such as THE GREAT LOVE as opposed to AVATAR the film trumpets,but fails to explain the film going habits of Germans (there was no TV or internet), or what THE GREAT LOVE is.

The second problem with the film is that it never really explains what any of the films we are seeing are. It simply cherry picks moments from the films to illustrate the point that they are propaganda but they don't tell us anything beyond that. Much talk is made about Emil Jennings UNCLE KRUGER project and how it's propaganda but what exactly is it? We're not told. This is especially troubling since the project was supposed to have been following the actor around as viable subject going back to Hollywood days.

While it's understandable that the Neo Nazi recruiter is in shadow his sequences kind of become laughable  with his talk bout using the films to turn kids into Nazi's. While what he says is probably right on (he warns that banning the films make them seductive to kids who think there must be truth in them if they are hidden) but the presentation had me chuckling the more he was shown.

The most damning thing against the film is that the film largely operates in a vacuum, There is no effort connect the films similar portrayals of ideas in Hollywood or elsewhere. The rah rah pro-Nazi/antisemitic stance of some of the films is troubling but there is no effort try and explain why parallels with some Hollywood propaganda is okay or at least less troubling.

What bothers me is the film makes an effort to show one guy after after JUDE SUSS screening say that the stereotypes in the film are used elsewhere even today against Arabs who are portrayed as terrorists and then does no follow up. Why raise the issue if you're going to do nothing about it? There in lies my problem with the film, we are looking at the dangers of Nazi propaganda but what of our own? Its never addressed-and it should have been.

I'm at a loss to fully comprehend what the point of the film is. That these films exist? Okay. That they are banned? And what? I don't know.

I do understand the fear that a handful of the films, THE ETERNAL JEW, JUDE SUSS and one or two others could pose if they are not given context, but some of the entertainment films covered have me scratching my head, I've seen a number of them and others and other then the settings and or references from the time  and place when they were made I see nothing wrong with them. There is nothing really wrong with them other especially if you take a look at them in context to some of the films coming out of Hollywood.

I'm disappointed. This could have been a film that really put it all into context, but its too myopic to really amount to much. While it got me ranting and raving, which is something, I still feel as though I've wasted my time and that therehave to better explorations of the subject out there.

For more information and tickets fo to the film's festival page here.
Posted by Steve Kopian at January 21, 2015