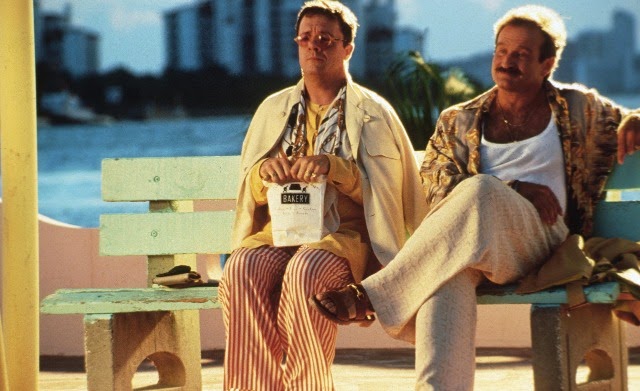 I was unsure if I should bother writing up The Birdcage for its run at the New York Jewish Film Festival. The problem was not so much that the film is bad, rather with the passing of Mike Nichols and Robin Williams the film was once more a high profile film as the film was used to highlight the careers of both men. Then again I decided that maybe a small piece would be in order and go with that.

The film is a remake of the semi classic French film La Cage aux Folles which spawned several sequels and a Broadway musical. The plot of the film has a happily entrenched gay couple (Robin Williams and Nathan Lane)in Miami beach getting word that their son is getting married. The trouble is that she is the daughter of an ultra-conservative politician (Gene Hackman) who hates gays. Deciding to make bow to convention for the son they love they decide to pretend to be straight with Nathan Lane pretending to be Williams’ wife. Of course it all goes sideways.

Its broad farce done so as to be very funny and deeply touching. Its so good that as I said it was trundled out in many areas as part of tribute screenings for the late Robin Williams and Mike Nichols. If you’ve never seen it you really should make an effort to do so. If you have seen it why not see it again.

For more information and tickets on the screening go here.
Posted by Steve Kopian at January 23, 2015