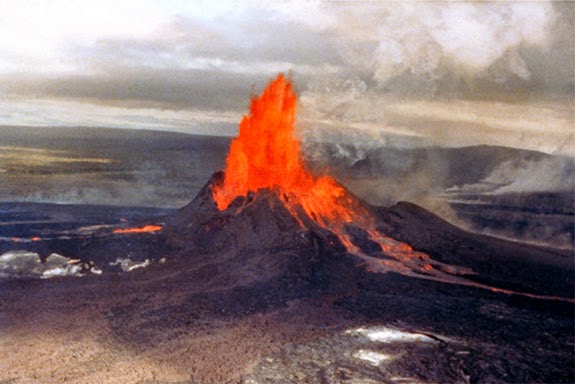 The Eruption of Kilaeua Volcano 1959-60 is wicked cool. Yea I know it’s a government information film, but in it’s 28 minutes there are some really cool images.

The film is essentially an explanation of what happened and when the volcano erupted in 1959 and 60 with color footage illustrating it. That’s really it, but it’s way more than enough.

The power and the wicked cool nature of the film come from the images of the eruption just running without cutaways. Yes we get the the typical lava flows, but we get huge geysers of lava flying in into the air. We watch as one eruption goes from nothing to spewing molten material hundreds of feet in the air in seconds. As the narration says there is no manipulation of the speed, what we are seeing happened exactly as it happens. The film also manages to give us a sense of scale for everything that is really lacking in most other films on volcanos.

I’ve always thought volcanos were neat, but after seeing this I think they are more so. You have to track the film down and see it BIG.

The film can be found on the Super Volacano DVD from Alpha Video or on You Tube.
Posted by Steve Kopian at January 09, 2015