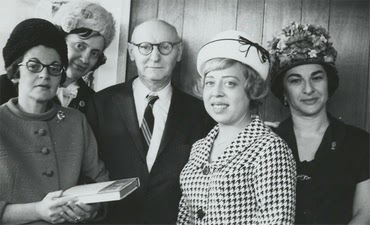 ...actually it's told by his translators and biographers, who in this case are all women.

The translators were necessary because when singer wrote he did so in Yiddish. His words then had to be translated into English from there, Unhappy with the translations and not wanting to have other peoples names attached to his work (John Updike did some translations)  he set about translating his own work himself.

A truly enjoyable film it reveals a great deal about Singer as a man and a writer. By having his translators tell us about doing the work, which Singer oversaw, we come as close as we can get to having the man explain his work to us. Its very cool. I particularly love the moment where the author of an adaption of Yentl explains how Singer said that one character would not say that she loved another character but instead wanted them which in plied something deeper. She said that the simple change of a phrase changed the entire play.

As a writer and an occasional dabbler in Singer's work my eyes were opened not only about Singer and his work but the process of writing and of translating the written word, even something you wrote yourself, into another language.

This is a neat little film and a great way to open this year's Jewish Film Festival. Very much recommended.