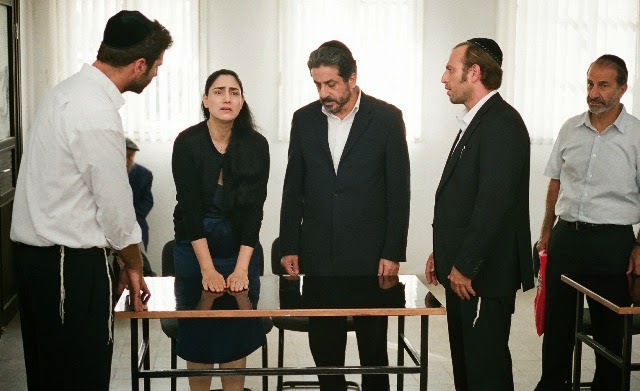 Israel's Foreign Language entry for the Oscars and the winner of multiple awards across the globe Gett: The Trial of Viviane Amsalem is a wicked trip into the land very much like the work of Franz Kafka..While it is a often a heart breaking film, it is also frequently quite funny in the "they can't be serious" sort of way.

Viviane has been married to her husband for 30 years. He is a rabbi of some standing. However for the last three years she has lived at her bother and sister in laws house. She can no longer live with the man who is her husband, She has taken him to the religious court to get a divorce. The trouble is that unless he agrees there can be no divorce.

Boldly told, the film takes place entirely inside the court room or the waiting room outside, We see only what happens in the court and no where else. It takes a long while before we get a clear picture of Viviane or her husband because they don't say much, we have only the word of the advocates for the couple to go on or their witnesses. Its a risk but one that pays off because we're forced to pay attention, we in effect a fourth judge.

There is a level of insanity running rampant through the proceedings that would be laughable if trials such as this weren't happening. Viviane's husband simply won't show up and the court can't do anything about it, except when they do. The husband admits they don't get along but won't let her go and when they try to reconcile he refuses to talk to her. Witnesses for one side or the other do more damage than help. Tactics hinge not on facts but innuendo. You will not believe that rational adults allow this sort of nonsense to go on.

What I like is that the film runs through a wide variety of emotions. Yes the film can be very emotionally trying, but at the same time it is funny. As I said above the film's Kafka like nature is amusing, but there are other very human moments that are just plain funny. When Viviane's sister in law testifies I almost fell out of my chair and down the staircase  next to my seat because I was laughing so hard.

The portrait this film paints is a damning one. In the theocracy that it shows women are genuinely no better than property. What their husbands want is what goes. There is a politeness about everyone and everything that makes you wonder why anyone is married. One of Viviane's neighbors breaks your heart when you see how happy her marriage really is. "Just respect him and you can do whatever you want" she says, her words ringing false since its clear she is little more than a slave to her husband.

This is a near perfect film that will make you laugh, cry and think.

Highly recommended when the film plays two times on the 21st.

For tickets and more information go to the films festival page.
Posted by Steve Kopian at January 17, 2015