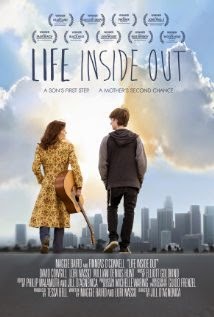 Mother and son Maggie Baird and Finneas O'Connell portray a mother and son who connect through music and begin to heal their lives.

Shane is a sullen teenager who doesn't want to participate in sports or all of the things kids his age do. When his mother decides on a kind of whim begins to attend open mic nights he rides shot gun.What at first is a way not to participate in the expected things begins to turn into a passion as he turns to music and connect with his mother and life. That's not quite how it is since much of the film is viewed from Maggie Baird's character's perspective but it's the only way I can give you a sense of the plot ithout sounding exactly like the promo material for the film.

I'm going to be honest and tell you I'm not a particular fan of the film. Its not bad, but it is suffers from an unevenness in the script and direction that makes this film hard to really get a bead on.

The problem with the script is that while at times it gets things picture perfect and shows family life as it really is, the dialog is often painfully laser-like and direct to the point it leaves little to the imagination. There is no shading of character. Things are very much x y or z. We know what we are supposed to feel because the script tells us what we're supposed to feel. There are also times when things occur which seem to be there simply because the film wants to drive us in a certain direction- much of the opening sequence involving a scrapbooking party is painful to watch because it's all set up and feels it-it has to tell us things and it does with a bullhorn.

The direction is unremarkable. I don't know whether director Jill D'Agnenica is unimaginative or she was hampered by how she had to shoot the film but the film feels a bit too much like it's a home movie. I'm also forced to ponder if her main job as an editor has limited her ability to direct creatively since I could more often then not pick out what the next shot in a sequence was going to be.

The one saving grace of the film is the music. The songs are pretty much wonderful across the board and to be quite honest they kept me watching the movie to the end despite wanting to bail on this film. To be completely honest I'd buy the CD and listen to that again before I'd ever watch this film again.

On the other hand the film has had an extended run in LA (which means check other reviews because they may be more positive than me) and has a high rating on IMDB and other sites the reaction to the film could be just me missing something. The film  opens the 16th in New York and is worth a look if the subject or thought of good music piques your interest.
Posted by Steve Kopian at January 14, 2015