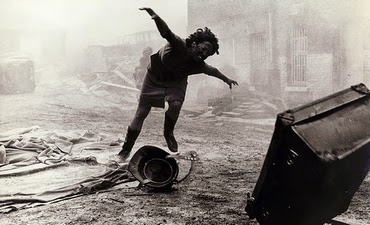 My introduction to the films of Peter Watkins came in my high school film class when they ran his Academy Award winning The War Game. The film rattled the class which hadn’t yet seen films like the Day After, Threads, or When the Wind Blows.

Although the film won the Oscar for best documentary the film is, thankfully, fictional. It’s a portrait of an English village after a nuclear attack. The film is, in typical Watkins style, made up of interviews and cinema verite reports of the situation in the small hamlet. We watch as the situation slides as the local authorities are shown to be not even remotely ready for the enormity of a nuclear attack.

Its unsettling, even today. The film is played deadly straight and in your face. As you’re watching the film it seems as if it really is happening. While we’re all fed a steady diet of doom and gloom by Hollywood and TV news shows in small bites seeing the film and it’s extended stay in the town rattles your cage because are defenses are circumvented by the news magazine style of presentation.

This film is a game changer on both the social and cinematic levels. Socially this was pretty much the death knell of the idea that we could survive. Duck and Cover was clearly a joke. Cinematically the film altered how we depict the end of the civilization- it’s not with a bang but a whimper. Every serious doomsday movie that followed is the direct descendant of The War Game. Probably its greatest off spring is the grossly underrated (at least as far as the US is concerned) Threads which is a kind of spiritual remake.

If you’ve never seen if go see it at the Jewish Film festival on the 20th. Though I should warn you this is screening with Kubrick’s first film Fear and Desire and if this is running first you may want to skip the second film and go out into the world just to feel better.

For tickets go to the films festival page
Posted by Steve Kopian at January 17, 2015