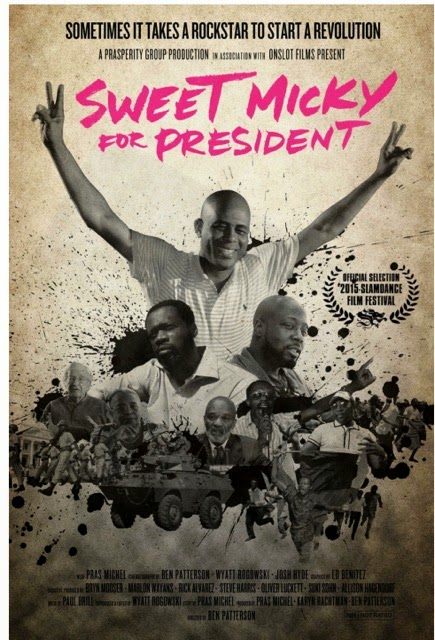 Ben Patterson's SWEET MICKY FOR PRESIDENT is a great film. Its a film you fall into and go along with and come out on the other side having not only learned something but enjoyed yourself as well

The film is the story of how Pras Michel of the Fugees, turned Haitian singer and a man occasionally referred to as the president of Haiti, Michel Martelly, aka Sweet Micky, into a Candidate for president of the poverty stricken and corruption ridden country. Marelly had been a thorn in the side of the rulers of the country for decades to the point he had been put on a death list. His running was seen as a ray of hope for the people and a complication for those in power.

Telling it's story with both a great sense of history and an understanding of the present SWEET MICKY FOR PRESIDENT tells the whole story of how it all went down from Michel's crazy idea to get Micky to run on to the troubles of running the campaign, including having Michel's fellow Fugee Wyclef Jean enter the race as well. From there we get the story of the voter problems-dead people on roles, prefilled out forms in the first round of balloting, through the unreset that followed Micky not making it to the second round.One would think that would be the end, but it's not, the story just keeps spinning out..

Technically brilliant this is a great looking film with a wonderful visual sense. Graphics are used to lay out Haiti's history as well as to bring events (most of this takes place in 2010 and 2011) up to date. The editing of the film is flawless and it makes it so the film grabs you by the throat and drags you along all the while making you a willing participant.

This is a freaking great film. How do I know, because ten minutes in not only was I looking forward to telling everyone about it I was wondering when the Bluray/DVD was going to come out and what extras there would be so I could see the film again and spend extra time with this great story.

If you love great documentaries you must see this film.

The film plays Thursday night at Slamdance. For tickets and more information go to the festival page here.
Posted by Steve Kopian at January 27, 2015