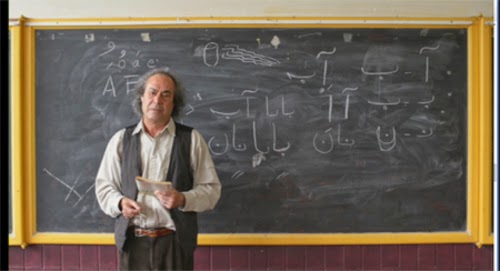 I FOR IRAN is running as part of the Museum of the Moving Images' First Look Festival on Sunday and is worth a look.

The film begins as director Sanaz Azari starts  lessons to learn Persian. Her mother left Iran and moved to Belgium and she is trying to reconnect with her mother tongue.  Thanks to the use of a post revolutionary text book, the lessons begin to get a parallel discussion of the nature of freedom and revolution in a post revolutionary society.

The  idea behind the film is incredibly simple and in a weird way the film is almost static  with the teacher sitting or standing before us talking about the Persian language or politics. Intercut with the sequences of the teacher are shot from inside the text book which take on different connotations as the discussion goes on. While its almost static, the film is never dull or boring simply because the discussion of everything is so interesting.

Think of it as sitting in on a discussion between two highly intelligent people talking about extremely interesting things and you'll have a great time.

The  film screens Saturday afternoon at the Museum of the Moving Image in New York. It's playing with INTERNATIONAL TOURISM about tourism to North Korea and LIVEPAN about ironing. For tickets and more information go to the film's festival webpage.
Posted by Steve Kopian at January 12, 2015